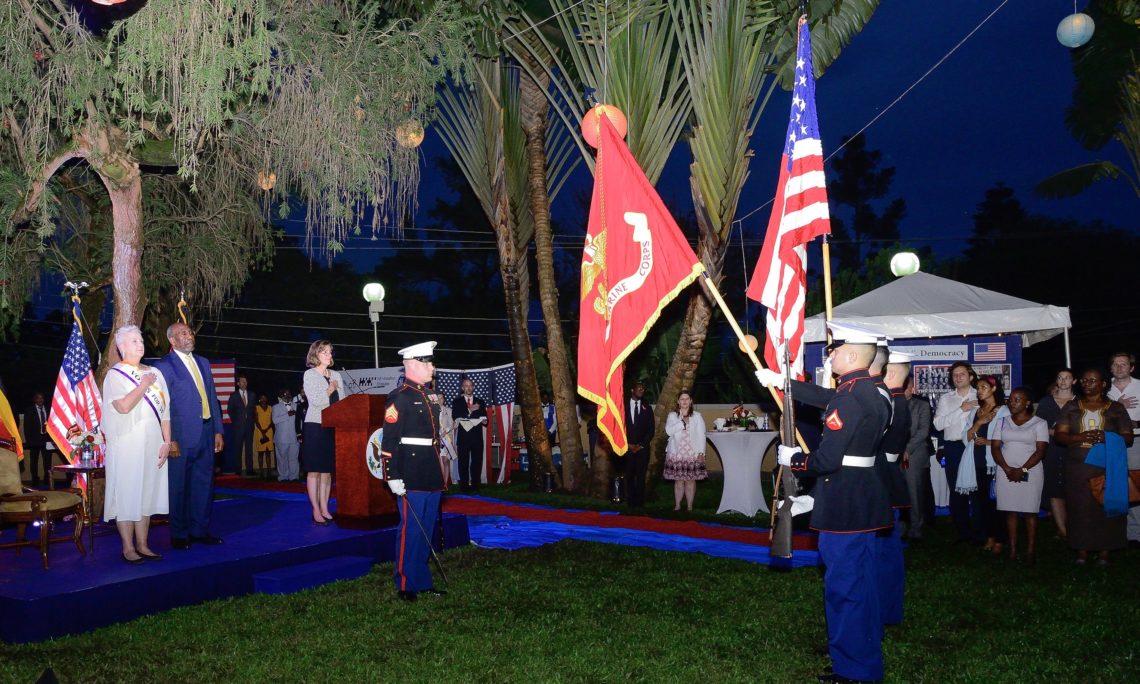 Right Honorable Dr. Ruhakana Rugunda, Prime Minister of the Republic of Uganda;
Honorable Members of Parliament;
Representatives and officials of the Government of Uganda;
Distinguished guests, colleagues, and friends;
All protocols observed.

Good evening, and thank you so much for being here to help us celebrate the 243rd anniversary of the independence of the United States of America.

This is our most important representational event each year in Uganda, and the one where we invite our very best contacts from the community here – all of you.  It is a chance for us to celebrate the U.S.-Uganda partnership, to strengthen our relationships, and most importantly, to have fun!

We are very fortunate this evening to have the popular and talented local music group the Janzi Band here to entertain us.  The Janzi Band has been a great partner of the U.S. Mission through a project to mentor Ugandan youth.  We also hosted them at the Embassy in May and Janzi Band member Ssewa Ssewa showcased his newly-created Janzi instrument – a great example of Uganda’s vibrant cultural sector continuing to innovate.  Later this evening you all will have the chance to hear this amazing new instrument.

Today we join together to celebrate the United States’ 243rd birthday.  It is a day when we honor our country’s founding ideals of democracy, liberty, and equality – the ideals for which we still strive to manifest for all Americans.  This year, we are celebrating Independence Day under the theme of 100 Years of Women in Democracy, to highlight the struggle and achievements of women and the power of citizens united for a cause.

One hundred years ago, in 1919, the U.S. Congress passed the 19th Amendment, which provided women the right to vote, and laid the foundation for the advancement of women’s rights in the United States and globally.  Achieving this milestone took many years of hard work and leadership from numerous women dedicated to the cause.  Many more years of hard work and leadership followed to ensure all American women could freely exercise their new constitutional right to vote.

One of the leaders of the women’s suffrage movement in the United States was Susan B. Anthony.  From an early age, Anthony was inspired by the Quaker belief that everyone was equal under God.  That ideal guided her throughout her life.  For over 50 years, she traveled around the country delivering speeches and advocating for women’s right to vote.  She gathered thousands of signatures on petitions, and she lobbied Congress every year for advancements in women’s rights.  In 1872, she was arrested for voting.  She was tried and fined $100 for her crime – a fine that she never paid.

On her 86th birthday in 1906, Anthony gave her final speech.  She concluded with the words, “Failure is impossible”.  This quote became the motto of women’s suffrage activists.  They continued to advocate, mobilize and to speak out.  Thirteen years after Anthony’s death, women achieved the right to vote through the 19th amendment, which became known as the Susan B. Anthony Amendment in memory of a powerful crusader who believed firmly in equality of women.

The women’s suffrage movement transformed American democracy by vastly enlarging the number of people who could vote.  As women gained additional rights, the United States became more and more prosperous, and we began to give truth to our country’s founding ideals of equality and liberty.  Today, our tradition of vibrant civic advocacy continues, as American citizens come together to celebrate and protect the rights enshrined in our constitution.

Women have made enormous contributions in all aspects of U.S. society.  On the big screen this evening, we are showing a slideshow of some of the women who have made significant contributions to our country – they include social activists, Congresswomen, Supreme Court justices, and more.  We also have a poster display in the tent to my left that includes some famous photographs of influential women in the United States over the years.  These women are the public and more famous faces, but behind them are legions of women who have benefited from the advocacy of those early suffragettes and the trailblazers who pushed the boundaries of achievement.

We know there is still much more work to achieve full equality for women in the United States, but we have made progress.  The current U.S. Congress sworn in this January broke several records.  It has more female representatives than ever before with a total of 127.  We elected our first Muslim American women, our first Native American women, and the youngest woman ever to be elected.  As someone who came of age in the heart of the Women’s Movement in the United States, I am glad to see this increased representation of women but frustrated that it has taken so long.  And we still haven’t cracked the ultimate glass ceiling and put a woman in the White House, although I believe it will happen, eventually.

These recent successes show us the way to reinvigorate a new generation in the fight for women to have a seat at the table and to be heard.  And while other countries around the world have also made strides in the past 100 years in improving women’s lives and offering greater opportunities, achieving true gender equality for all women remains an elusive goal.  “Balance for Better” was the theme of this year’s International Women’s Day.  Indeed, it is the goal for which we strive – the opportunity for every woman and girl to stand side-by-side with men and boys to work together to build the future we all deserve.

Women’s rights are human rights, and women’s issues are human issues.  They are also international development issues.  Research clearly shows that investments in women’s employment, health, and education have a direct connection to a country’s economic growth and successful development.  This is a proven fact.  No nation can become a vibrant middle-income country if it leaves half its population out of the development equation.

Just as women in the United States are making great contributions to our country, the same is true in Uganda.  It seems like every day that I am meeting talented, young Ugandan women who are dedicated to contributing to their country, and are making a difference.  There is a long history here of women agitating for change in different spheres, and there is a new generation of young women who are showing great promise.  For example, I remember attending the Women’s March last year, organized by young, tech-savvy women.

Empowerment of women and girls is a core part of U.S. foreign policy around the world.  In Uganda, the American people are investing in a broad range of programs to support women and girls.  Most of our funding is dedicated to women’s health, especially maternal and child health, prevention of gender-based violence, and prevention, care, and treatment of HIV/AIDS.

We are also very focused on supporting girls’ education and literacy, something that is so fundamental to giving girls and women a chance to succeed.  The DREAMS program, funded by the President’s Emergency Plan for AIDS Relief, aims to prevent sexual violence and new HIV infections in Uganda among at-risk girls and young women by increasing their access to education and employment opportunities.  And we have also trained Ugandan representatives from law enforcement and the judiciary in preventing, combatting, and prosecuting gender-based violence cases.

There is of course more I could mention about our programming in Uganda, but the bottom line is that we view the empowerment of women as fundamental to Uganda’s success, and our programs reflect this.  Each year we produce an annual Report to the Ugandan People, a book that explains all of the work we are doing in partnership with Uganda for the development of the country.  We expect to have the next edition ready in August, and I hope you all will take the time to read it.

Going forward, we are excited to strengthen our efforts in partnership with the Ugandan government and people to support girls and women throughout the country.  The work of advancing women’s rights is difficult and uncomfortable – we have certainly experienced this in the United States – but it is crucial work, and we urge the Government of Uganda to prioritize actions to combat gender-based violence and ensure equal opportunity.  How many events do we all attend that call attention to the high prevalence of gender-based violence only to see little concrete action afterwards?  We must channel our collective outrage over sexual harassment, assault, and physical and emotional violence against women into meaningful actions – not just blame the victims and sweep incidents under the rug.

How do we advance this fight?  Education, health and poverty eradication are all key to creating an environment that protects women and children and allows girls to grow safely and achieve their full potential.  Yes, infrastructure is important for long-term economic growth and development, but it cannot come at the expense of investments in education and health because human capital is equally as important as infrastructure.  “Balance for Better” applies here as well; and, I return to my earlier comment that countries cannot succeed without women fully in the development equation.

How do we get there?  By remembering those women in the early days of the fight for the vote and their opening salvo in the battle for gender equality.  Susan B. Anthony and her sisters refused to be quiet.  They challenged the status quo, made those in power feel uncomfortable, and said things in their day that sounded radical.  Men called them “pesky”, “impertinent” and names not suitable for polite company.  Men arrested them, broke up their rallies and “returned” them to their husbands and fathers to be disciplined.  But still, these courageous women stood up and spoke up for what they believed, for what was right and for what was good for the future of the country.  They stood firm and strong in the face of adversity and opposition, steadfast in the belief that “failure is impossible”.

Democracy is built on the belief that the people have the right to determine their collective future – not just to have a say in how they are governed, but in how they live and how they build a better, stronger society together.  Civic advocacy, collective action, and active engagement are vital to a vibrant democracy because when we as citizens are not engaged, not paying attention, that is when our rights begin to disappear.  Susan B. Anthony, her sisters, and activists who followed her in the women’s movement and eventually the civil rights movement show us the power of people coming together using their voices constructively and peacefully to create change.  Do not ever be quiet.

In closing, I would like to say a special thank you to our sponsors – American businesses in Uganda in the technology, healthcare, transportation, agricultural, hospitality, financial, and engineering sectors. They include:

They have invested in Uganda’s future and its people, and they demonstrate the power of what our countries’ private sectors can do together.

Thank you to the U.S. Mission family for all the work you do every day in service to our country, and for all of your efforts in organizing tonight’s event.  And thank you once again to everyone for joining us in tonight’s celebration, and for your continued partnership with the U.S. Mission.

Now, if you would please join me in a toast.  Please raise your glasses to the lasting bonds of friendship between the United States and Uganda, and our efforts to strengthen our partnership.  Thank you.