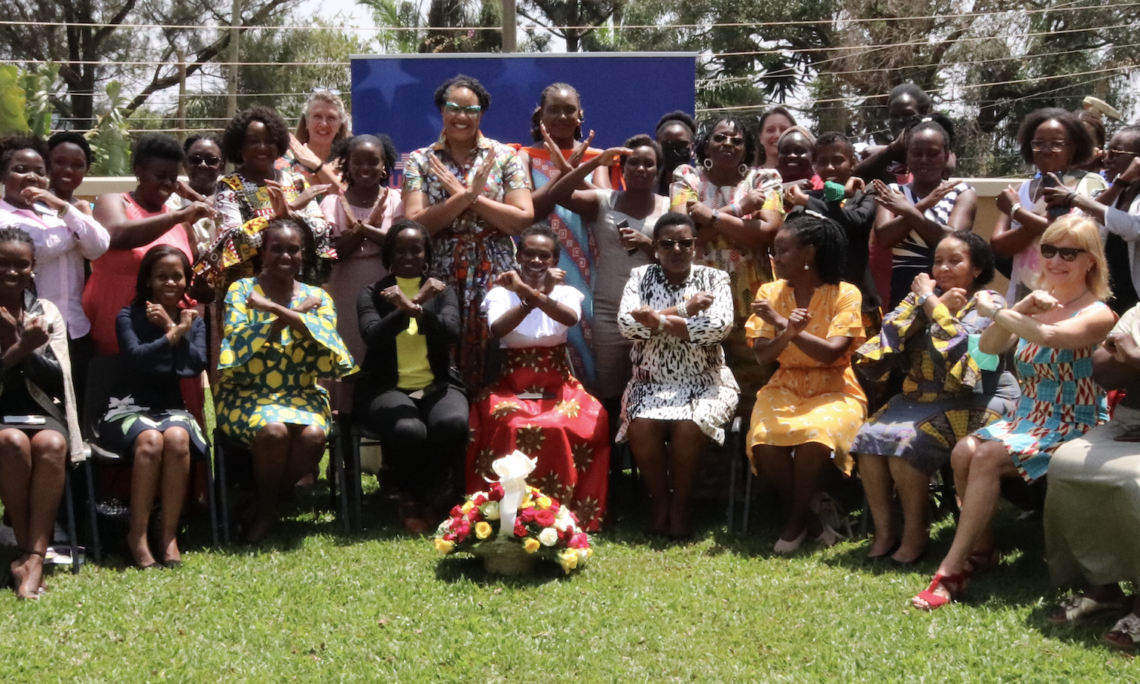 U.S. Ambassador Natalie E. Brown hosted a reception in honor of Ugandan Women of Courage on March 12, 2022 to recognize trailblazing Ugandan women, including many with direct ties to the Mission, in fields such as human rights, health, business, politics, education, and the arts.  Modeled on the Department of State’s International Women of Courage (IWOC) Awards, U.S. Mission in Uganda staff nominated these women to demonstrate the depth of the United States’ support for women’s empowerment in Uganda.

Each invited woman of courage brought a mentee, an up-and-coming woman in her field, to accompany them to the reception.  Involving younger women in this event is an example of the U.S. Mission in Uganda’s efforts to build the next generation of Ugandan leaders.

Find more information about the Department of State’s 2022 IWOC Awardees at https://www.state.gov/secretary-of-states-international-women-of-courage-award/.

Dr. Annet Alenyo is one of the first physicians in Uganda with specialty training in emergency and disaster medicine.  After receiving her medical degree in Uganda, Dr. Alenyo received specialty training in Italy and South Africa.  During the height of the COVID-19 pandemic, Dr. Alenyo created the first-ever triage training for staff at lower-level clinics across Uganda and created a triage system at Namboole Stadium. Additionally, at Mulago Hospital, she instituted and managed the emergency department and patient triage, creating new patient care protocols that undoubtedly saved many lives.

Professor Wanyenze has been engaged in public health programming for 28 years, including implementing large U.S. Centers for Disease Control and Prevention (CDC) funded projects for over 20 years.  She has vast experience in public health research, capacity building, and program management, especially in infectious diseases, sexual and reproductive health, and health systems. She has been a key figure in the overwhelming success of U.S. programs created to teach and mentor young Ugandans entering public health. Under her leadership, the Master of Public Health program has become one of the best public health programs on the continent and has directly contributed to the overwhelming success of the U.S. government-funded Public Health Fellowship Program. She has also led U.S. National Institutes of Health (NIH)-funded and Bill and Melinda Gates Foundation projects to great success. She has published over 180 peer-reviewed papers and has served on many boards in Uganda and globally.

Grace Bantebya-Kyomuhendo is a Professor of Women and Gender Studies and advocate for gender equality, social transformation, and respect for women’s rights.  She is a distinguished social anthropologist with a wealth of experience in gender/ feminist and social norms research.  Professor Bantebya has extensive research experience on women in the workplace, sexual harassment, education, and inequalities.  She is a respected voice on gender issues in Uganda and has received several awards, including the Female Professor Gender Award by the Gender mainstreaming Program at Makerere University 2010, and the 2007 Winner of the Aidoo-schneider Book 2007 Prize for her work “Women’s Work and Domestic Virtue in Uganda (1900-2003).”

Ms. Katusiime is the Founder and Co-CEO of Endiro Ltd with over 10 years of experience in the coffee value chain. Endiro Coffee consists of eleven locations in Kampala and Eastern Uganda as well as a coffee shop and roastery located in the Chicago-area (USA). The Endiro brand has positioned itself as one of the premier coffee brands in Uganda, leading the way in serving high quality, single village-lotted and ethically sourced Ugandan coffees to the public.  Endiro operates a vertical integrated supply chain model where they source coffee from 300 coffee growers, most of whom are women in the villages of Bukalasi and Mattaya in Bududa district. Endiro growers produce some of the highest quality beans in East Africa and their coffee has cupped some of the highest scores in the region consistently

Ms. Agol is the Founder and Creative Director of naRoho Company Limited based in Kirombe, Luzira in Kampala. Established in 2016, naRoho is a women-led, accessible, and competitive manufacturer, that creates quality authentic leather accessories that inspire confidence from the clientele. naRoho intentionally provides a platform for young women’s economic empowerment through training and professional growth of young female artisans, to establish a sustainable and ethical brand that is innovative, while remaining affordable.  naRoho aims to create an empowering environment for young women to provide for themselves and their families.

Ms. Nabiruma is a passionate advocate for clean energy access, and a safe civic operating space for environmental and human rights defenders, especially women. She has led efforts to promote human rights and environmental protection surrounding the EACOP project, engaging big oil companies and powerful governments.  She has been involved in efforts to ensure fair land compensation for those affected by the pipeline.  Ms. Nabiruma’s work has earned her recognition from leading conservation organizations and diplomats.  She was recognized as a Face of Conservation from Africa by the International Union for Conservation, Netherlands National Committee (IUCN, NL) in 2018.

Ms. Zalwango is the newly appointed General Manager at the American Chamber of Commerce (Amcham) in Uganda.  Evelyn is a 2015 Mandela Washington Fellow alumna who owns a carpentry business, V Interiors Limited, which won the Women 4 Women Award for Best Businesswoman in Uganda in 2018.  She is the founder of a charity initiative that supports land mine victims in western Uganda.   Evelyn has served as President of the Uganda Young African Leaders Initiative (YALI) Fellow Chapter from 2016-2017 and conducted entrepreneurship trainings.

Primah Kwagala is a human rights lawyer, Chairperson of Female Lawyers in the Uganda Law Society and Executive Director of the Women’s Probono Initiative (WPI) – an organization whose vision is a Uganda free of violence and discrimination against women and girls.  WPI works to achieve their vision through legal representation of vulnerable women and girls suffering discrimination, legal empowerment, research, and knowledge sharing.  In 2020, Primah was named Peace and Reconciliation Laureate by the French and German Embassies to Uganda in honor of her work defending women against violence and discrimination in Uganda.

Ms. Kassajja is a corporate lawyer who is passionate about causes supporting women and children.  In addition to her regular job as a partner at Kampala Associated Advocates and board member at the Uganda National Oil Company, she takes on around three pro-bono cases every year.  Ms. Kassajja uses her connections at a powerful firm to push cases through that would otherwise get trapped or dropped in the judicial and police system.  With gender-based violence cases rising during the COVID induced lockdowns, Ms. Kassajja leveraged her professional contacts and profile to seek justice for victims, including in one case where a widow was raped by a senior cleric in her community and later forced to sign a form, she could not read exonerating her abuser.  She participates in numerous charity activities centered on education and child welfare and she is a volunteer with a mentoring program for young women.

Joyce Wanda is the co-founder of Reach for Uganda, formerly known as the Arlington Academy of Hope.  Their cohesive programs function as building blocks that give both students and these communities their best chances for sustainable successes. Joyce’s work through REACH and AAH Uganda has been recognized by entities such as Rotary International, Arlington County, VA, the Caring Institute, and the Daily Points of Light. Her work has been acknowledged by the Washington Post and other international and national publications.  Joyce travels back and forth between USA and Uganda, supporting the REACH program in the USA, and for the Arlington Academy of Hope Uganda. REACH for Uganda is committed to creating healthy, educated, and hope-filled communities in rural eastern Uganda.

A leading women’s rights advocate, politician, NGO leader, and former member of parliament representing Mbarara, former member of the Pan-African Parliament and a former Minister of Ethics and Integrity.  She was a member of the Uganda Constitutional Commission that drafted Uganda’s 1995 Constitution and a delegate of the Constituent Assembly that debated Uganda’s 1995 Constitution from 1994 to 1995.  Ms. Matembe has risen above the political fray to make frank statements and actions.  As founder of the Center for Women in Governance and other organizations, she has used her position to push for more opportunities for young women.  She is a recipient of many awards among them, the 100 World Heroines.  Ms. Matembe is a courageous role model and mentor for many women and young people and is the author of several articles and books, including “The struggle for Freedom and Democracy Betrayed.”

Ms. Kalembe, a presidential candidate in the 2021 election, is only the fourth woman to contest for Uganda’s presidency and the first one to do so below the age of 40.  She has twenty years working experience in both the public and private sector in East and West Africa.  Since 2012, Ms. Kalembe has worked with women at the grassroots, looking to help them build economic self-sufficiency through a range of socio-economic activities (agriculture, processing, and vocational undertakings. etc.).  Ms. Kalembe has faced challenges of pushing boundaries in politics with dignity and continues to be a role model for women who want to run for political office.

Ms. Nabwiso is a Ugandan actress, producer, director, and female filmmaker, blazing trails as a woman in a male dominated industry.  She has earned accolades for her film production and acting and has won many awards within the Ugandan film industry and elsewhere.  These include “Best actress in East Africa” in FESTICAB Burundi, 2017, Best Africa focus film “Bed of Thorns” in the 2019 London Arthouse film festival.  Her movie “Rain” won the 2017 best film in Africa and Middle East in Nuren, China and best women’s rights film award in the London Eye International Film Festival. With “Bed of Thorns,” Eleanor made the first ever all female crew movie in Uganda that claimed the best script/screen play in the 2019 Uganda Film Festival. She has motivated young women to seek careers in new fields.