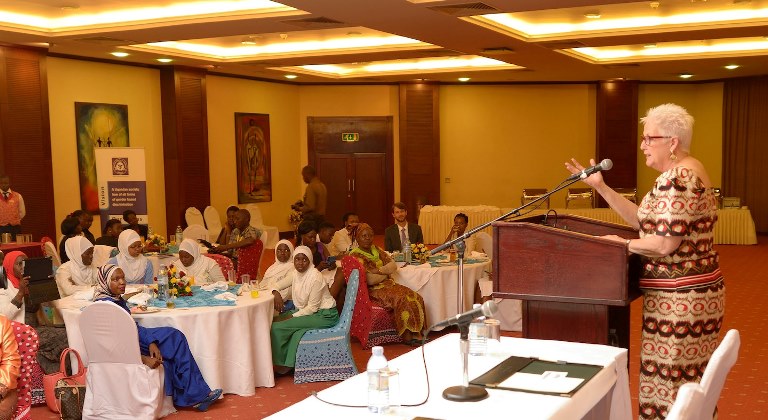 As prepared for delivery

Good afternoon everyone!
It’s my great pleasure to be here today with you all to discuss women and leadership – a topic that I’m sure many of you consider on a daily basis. Before we start, I would like to thank Rita Aciro Lakor, the Executive Director of Uganda Women’s Network, for partnering with us on this event. Her work and her organization are instrumental to advocating for women’s rights and gender equality in Uganda. I want to extend thanks to Rita for the tremendous accomplishments she and her organization have achieved.

As the leader of the U.S. Mission in Uganda, I am pleased and proud to see so many other women in leadership positions around me – from our Deputy Chief of Mission to the director of our USAID Mission, from the chiefs of our Consular and Public Affairs sections to the many other women throughout the Embassy who lead in ways big and small. I am truly honored to work with all of them.

As you might imagine, the topic of women and leadership is near and dear to my heart. But it’s not just because I’m a woman in a leadership position. The research is clear: investments in women’s employment, health, and education have a direct connection to a country’s economic growth and successful development. This is a proven fact. No nation can become a vibrant middle-income country if it leaves half its population out of the development equation. For this reason, the United States has made justice for women and girls a core part of its foreign policy.

Governments and citizens alike must therefore find ways to include that 50 percent of its population who are female in making decisions that affect women as much as men. Women must have access to the same opportunities as men. Now, I have noticed here in Uganda that men sometimes complain that if women’s economic and social situation improves, they will suffer. Let me be clear: gender equality does not mean making one gender better than another or putting women ahead of men. Gender equality means creating partnerships between women and men to help move countries forward.

The evidence shows that women and girls in Uganda do struggle. Recent UN reports state that one in four Ugandan teenage girls get pregnant. Almost half of all Ugandan girls are married before the age of 18. Some 20 percent of girls above age 5 never receive formal schooling. Each of those numbers represents another girl’s potential not realized.

Now, as you may know, I sometimes get accused of being too direct. Outspoken women often get criticized. But those statistics about Ugandan girls speak for themselves. Ugandan girls and women deserve better lives than what these statistics indicate, and steps must be taken now. Ugandans everywhere – from government and civil society to parents and teachers – will have to take responsibility to make the necessary changes to reverse these trends. I have no doubt that the people in this room are ready to answer this call to action.

As you all know, women are tough, women are fighters, and women throughout history have changed the world. I’d like to ask you to take a look around the room. Look at the power, talent, knowledge, and strength in this room alone. We have brought together impressive, influential people working hard to make Uganda more secure and supportive for women, especially the girl-child.
Today’s theme is about overcoming invisible barriers to women’s leadership. Women face bias and discrimination around the world, including in my country. Right now a woman is running for president, but our Congress is less than 20% women. Decades after the social changes in the 1960s and 1970s in my country, women still earn only 79% of what men earn.

I came of age in a generation in the United States where the possibilities for women were finally open. But often those of us entering traditionally male-dominated professions felt alone. Asking for help, guidance or even having a mentor was considered a sign of weakness. We assumed that in order to be considered competent and accomplished, we had to work harder, be stronger than our male counterparts. But with time, women have realized that it is important in any kind of life journey to have those people around them who can give advice. And particularly for women, it is important that we work together. It is important we look out for those who come behind us and help them not make the same mistakes we made along the way.

As a sign of our commitment to the developing the leadership potential in young women, we have invited a group of girls from Kawempe Mbogo Secondary School to listen in on today’s discussion first hand. I would like to give a special shout to these future leaders. We want you to see what Ugandan women are achieving every day. We want you to know and understand that courage and leadership are not just for men. These qualities are not a function of your gender but what is inside of you. I challenge you to believe in your intelligence and in your achievements. It might not always be easy but it is your life and your future. We believe in you, and we want you to believe in yourselves.

To everyone else, when you get tired or frustrated with this battle, and I know you will some days, I encourage you to turn to each other for support. The journey towards equal rights is a challenging one. Still, we are moving in the right direction because of brave individuals, both men and women, who take risks to push boundaries. Be challenged and push past those unjust barriers. More importantly, be inspired by and learn from those around you.

At the embassy, the work of Ugandan women leaders inspires us every day. Through President Obama’s Young African Leadership Initiative, also known as YALI, we have sent 38 young Ugandan leaders on the Mandela Washington Fellowship. In June, we will send another 30 Ugandans for a six-week leadership exchange to America. We have equal representation of men and women on that fellowship. A few of these young African leaders are in the room, and I’d like to ask them to stand up and be recognized for their past – and future – achievements.

While they are all fantastic, I would like to highlight three of the past Fellows here today – Angela Kirabo, Sherry Tumusiime, and Jamila Mayanja. Angela had grown tired of dealing with and seeing sexual harassment in the work place. Her desire was to create an online platform for working women to start a discussion about the frustrations of sexual harassment. She also wanted women to know that they aren’t alone. After they returned from their Fellowship in America, Angela got Sherry and Jamila on board.

They quickly realized that being a woman in Uganda is not a one-topic discussion. In response, together they created the online platforms “Smart Girl Uganda” and “Smart Women.” This female-centered organization empowers and mentors girls and women to speak out, be decision makers, and create visionary change.

Every two months, they bring together women and men over coffee to hold discussions on issues that affect women in Uganda. The U.S. Mission has been honored to be part of these discussions. Last month, they discussed sexual harassment in the workplace; next month’s discussion will be discovering your true self-worth. If you are interested in attending, and I hope you are, please see Angela, Sherry, or Jamila today. And I should note that they are doing this in their free time, around their normal day jobs. These young women inspire me, and I know you will enjoy working with them.
Getting back to today’s event, we have a panel of extraordinary Ugandan women with us. They have worked courageously for the good of their communities and their country from the grassroots level to government, to academia and to business. You will hear about their experiences of how they took remarkable risks and overcame seemingly insurmountable obstacles. In the end, they all prevailed in the face of discrimination to be the leaders that they are now.

I truly hope you realize that you all are remarkable Ugandans. I have no doubt that you will continue to advance the cause for women in this country and continue to make life better for girls and women. As I said in the beginning of my talk, improving the lives of girls and women will lead to a more prosperous Uganda. The U.S. Mission stands with you as you work to make Uganda and the world more equal and more just – especially for its women and girls, as well as for you, your children, and your grandchildren.