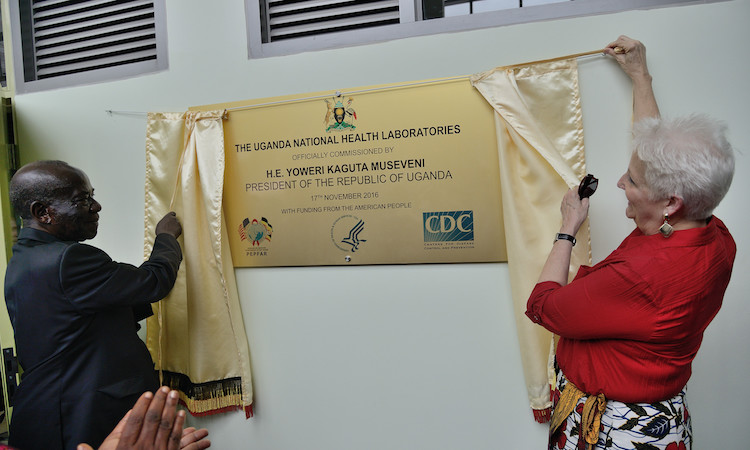 November 17, 2016: The United States Government, represented by U.S. Ambassador to Uganda Deborah R. Malac, demonstrated its ongoing commitment to improving Uganda’s health systems during the official opening and dedication of the country’s National Health Laboratory in Butabika. The United States is proud to have supported the construction of the Laboratory, which will help improve the lives and health of all Ugandans, especially women and children.

The National Health Laboratory, the result of years of collaboration between the U.S. Government and the Government of Uganda, will coordinate the work of all Ugandan medical labs. With this support, health practitioners will be able to provide more accurate and faster diagnoses, researchers will be better able to track and respond to infectious disease outbreaks, and Ugandan families will be able to receive more comprehensive medical care. The National Health Laboratory will focus on combatting the threats posed by HIV/AIDS, through efforts that reduce Mother-to-Child Transmission of HIV, improve the capacity to monitor viral load among patients on antiretroviral therapy, and expand tests for early HIV detection and diagnosis in infants. The Laboratory will conduct additional screenings for sickle cell disease, Hepatitis B, cholera, plus other diseases of public health importance, which will likewise contribute to a healthier Ugandan population.

Speaking at the opening, Ambassador Malac underscored the Laboratory’s importance in creating an AIDS-free generation in Uganda. “By processing viral load tests for people all over Uganda, the National Health Laboratory will help reach UNAIDS’s ambitious 90-90-90 goals to help end the AIDS epidemic here,” Ambassador Malac said. The 90-90-90 treatment target states that by 2020, 90 percent of all people living with HIV will know their status, 90 percent of all people diagnosed with HIV will be on antiretroviral therapy, and 90 percent of people receiving antiretroviral therapy will have viral suppression.

With funding from the U.S. President’s Emergency Plan for AIDS Relief (PEPFAR), the U.S. Centers for Disease Control and Prevention (CDC) provided technical assistance and $8 million for the construction of the National Health Laboratory, which was completed and officially handed over to the Ministry of Health in January 2016. Since 2004, PEPFAR has invested nearly $3 billion dollars in Uganda’s fight against HIV. As the largest provider of health assistance to Uganda, the U.S. Government invests $495 million each year in Uganda’s health sector to strengthen Uganda’s capacity to address HIV/AIDS, tuberculosis, malaria, maternal/child health, and emerging health threats.