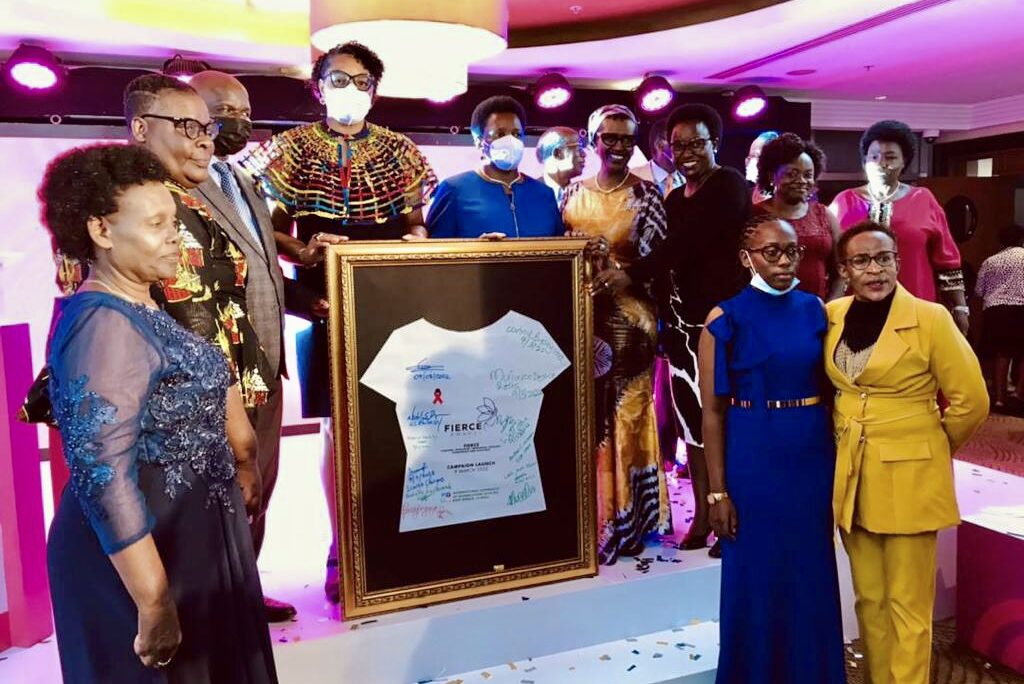 Good evening; I am honored to be here tonight surrounded by so many exceptional women to celebrate remarkable women who have dedicated themselves to improving the quality of lives of people living with HIV.

Throughout history, women have quietly led and contributed (and I emphasize the “quietly” here) not because they didn’t have a voice or didn’t need recognition, but because the world wasn’t willing or ready to hear them, or recognize them for what they were: courageous, resilient, and intelligent women who were excelling as fighters, advocates, activists, champions, mobilizers, educators, and service providers, all while fulfilling the traditional roles of being wives, mothers, sisters, and daughters.

This quiet female leadership has been consistent worldwide throughout international conflicts, natural disasters, revolutions, famines, global movements, health crises, and most prominently during the recovery periods following these many taxing times in history.

However, before HIV was understood and the before-mentioned improvements were possible or even fathomable, there were women, some of whom are here tonight, who, while facing their own mortality, did not give up on themselves, their families, or their communities. They continued to get up each day, fulfill daily responsibilities to their families, and muster the extra energy to support those who were suffering, to take care of those who were left behind, and to mobilize others to keep moving forward. Without these strong and selfless women, there would have been infinitely more suffering.

From the early stages of the HIV epidemic, fear drove widespread stigma and discrimination; the disease was not understood; it was infecting people and causing death at a rapid rate. Fortunately, that is no longer the case. Although we have not yet found a cure for HIV, we now better understand the disease, how to treat it, how to prevent it, and most significant, how to live long and healthy lives with it. And yet, stigma and discrimination remain, causing unnecessary illness, death, and social isolation.

However, courageous women here in Uganda and communities around the world tune out the voices of others and steel themselves to care and advocate for others in desperate need. As HIV, then an unknown disease, took hold of those around them, these women, rather than casting those who fell ill in a shadow of judgment and stigma, showed unending compassion and maintained the inherent dignity and fundamental rights of all those around them.

These women of whom I speak have fought a long and hard battle, never giving up even when there seemed to be no hope and still not letting up even when glimpses of hope arrived. Instead, with the arrival of hope in the form of ARVs, these women shifted their strategy to continue to address the stigma all around us, making sure people know how they can prevent infection, feel empowered enough to seek their status, and understand and appreciate the incredible life-changing impact of modern HIV treatment. And, for those who have already been infected, these women inspired and encouraged them to embrace and lead the full and healthy lives they deserve.

These women are unassuming heroes, humbly giving of themselves to support others in need. The world at large can learn a tremendous amount from them and their quiet, their deliberated, and their unheralded bravery.

Above all, the lesson to learn is that ALL of us have a role in promoting an inclusive and supportive environment.

On the subject of learning, did you know that the 2019 People Living with HIV in Uganda Stigma Index Survey found that of those individuals who did not enroll for treatment within six months after testing positive for HIV, 74% said they delayed doing so out of fear of others learning about their status? Additionally, the survey found that in the previous 12 months, more than 20% of survey respondents missed a dose of their ART due to fear of someone learning about their HIV-positive status.

Another part of promoting an inclusive and supportive environment is acknowledging inequities. Did you know that in sub-Saharan Africa, six in seven new HIV infections among adolescents aged 15-19 years occur among girls? And, that around 4,200 adolescent girls and young women aged 15-24 years became infected with HIV every week in 2020.

And the 2018 Uganda Violence Against Children Survey (VACS) reported that among 18 to 24-year-old females, more than one in three experienced sexual violence during childhood, and of those experiencing violence, only one in thirteen received services. The survey also reported that those who experienced any violence, including sexual abuse, physical, or emotional violence before or after the age of 18, were significantly more likely than those who did not experience any violence to report an HIV-positive test result. According to UNAIDS, in some regions, women who have experienced physical or sexual intimate partner violence are one and a half times more likely to acquire HIV than women who have not experienced such violence.

How do we address this stigma, the inequities, and the violence? We must change behavior by acknowledging inequities, reducing fear, increasing knowledge, and shifting societal norms. However, the necessary social behavior change cannot happen without open and honest conversations at home, at school, in the workplace, in places of worship, within communities, and at the national level. These conversations need to occur between genders and across generations. We must all come together to work toward gender equality and stop the violence and the stigma that comes with it.

And it is time for those voices raising awareness to be heard! This is why, the United States, through the President’s Emergency Plan for AIDS Relief, or PEPFAR, is committed to hearing and amplifying the voices of these women and those of the many other advocates within Uganda’s communities and civil society. Just this morning I met with some of these representatives, including the faith community, sex workers, sexual minorities, and those living with HIV or AIDS. The community-led monitoring activities they completed this past year achieved results. For example, the process enabled community members to better understand the quality and impact of services through interviews focused on people’s lived experiences; and allowed the people’s voices to be presented with and supported by unbiased, deliberate, and data-driven advocacy. This community feedback has resulted in the expansion of a program designed to help young women live safe, productive, and AIDS-free lives in urban areas like Kampala, growing the PEPFAR DREAMS (Determined, Resilient, Empowered, AIDS-free, Mentored, and Safe) program from 23 to 24 districts in Uganda.

Hearing and amplifying these voices also means committing to gender equality, and the U.S. government is prioritizing gender equity throughout our global programming, including here in Uganda through the implementations of programs like No Means No, which is a platform we are using to support young people to take the first step in breaking the cycle of violence. Caregivers and communities whose children participated in No Means No sessions have indicated that girls who go through this program become more empowered to prevent violence. Seeing the benefits of the girls’ program, the U.S. government recognizes that it is also essential to engage boys in conversations that support breaking the cycle of violence. Global evidence shows that boys who witness their fathers beating their mothers are more likely to perpetuate the cycle of physical violence when they grow up. Interpersonal violence is a tragic cycle that impacts not only the current generation but future generations as well. We can change that by helping boys learn different ideas about masculinity — about what it means to be a man — through open discussions about violence and enabling boys and men to become advocates for equitable relationships.

Above all else, we must acknowledge that these fearless women, who we are recognizing tonight, have already inspired a generation of young people to own their HIV status, mobilize, and engage their peers in stigma reduction. This is evidenced by the continued growth of community organizations like Uganda’s Network for Young People Living with HIV, or UNYPA, and the roles these organizations play alongside and in partnership with the U.S. government.

I have had the pleasure of meeting and engaging with many of these extraordinary young people on several occasions. I have the utmost respect for the work that they are doing throughout Uganda to reduce stigma and discrimination, support service delivery, and advocate for greater involvement of youth in Uganda’s National HIV response. Many of them are even directly working with PEPFAR’s Youth, Adolescent, and Peer Support model. And this is critical because youth are one of the communities least likely to know their status, least likely to be on ARVs, and least likely to have suppressed viral loads. So, if we are going to reach epidemic control of HIV in Uganda, we need young people on board, and we absolutely need organizations like ICWEA and UNYPA to get us there.
So, without further ado, tonight, we are here to celebrate you, to tell you that what you do matters, and to recognize you for your significant contribution to the HIV response. Your often unrecognized “FIERCE” courage over the years has saved lives, influenced the opinions and behavior of many, and will inspire another generation of women leaders to join the movement and use their voices to lead us toward ending HIV by 2030.