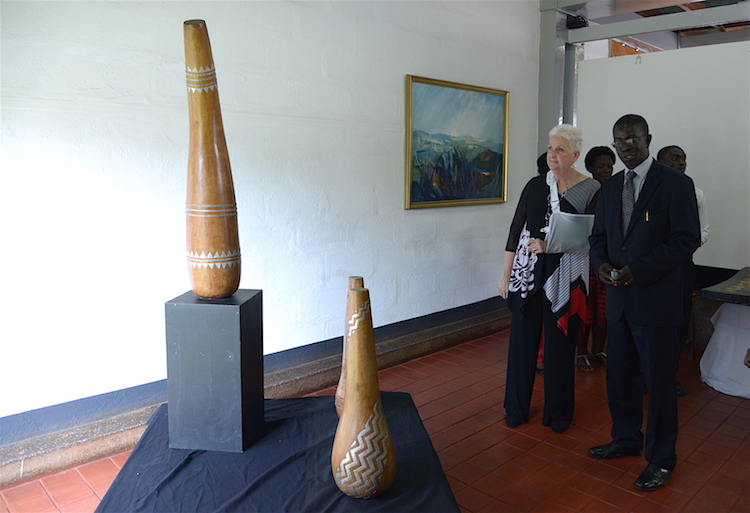 In 2001, the Congress of the United States of America established the Ambassador’s Fund for Cultural Preservation (AFCP) as a tool through which the people of the United States could help less developed countries to preserve their cultural heritage. Through the Ambassador’s Fund, American embassies around the globe are helping eligible countries to preserve historic sites and manuscripts, museum collections, and traditional forms of music, dance, and language.

Call for Proposals
The American Embassy is now accepting proposals for the 2017 Ambassador’s Fund. Successful proposals identify one-time of recurring projects that assist the people of Uganda in preserving their cultural heritage. Grants typically range from US$10,000-$200,000. Proposals may include preservation projects directed at:

A) Cultural Sites—Includes (but not limited to) historic buildings and sites, sacred places, monuments, and archaeological sites;

B) Cultural Objects and Collections from a museum, site, or similar institution and includes archaeological and ethnographic objects, paintings, sculpture, manuscripts, photographic and film collections, and general museum conservation activities; and

Proposal Assessment Criteria
Proposals must address all of the following criteria:
• A description of the project and participants, including the time frame for completion.
• An indication of the importance of the cultural or sacred site, object/collection, or
form of expression. All should be of relevance to Uganda.
• An indication of the urgency of the project.
• An assessment of the impact of the U.S. contribution to the preservation project.
• A detailed budget showing expenditure of funds.
• Recipient information including resumes of project director and professional staff
• Official permission to undertake the project
• An indication of other funding sources, if any. (Note: strong encouragement is given
to local cost-sharing including support in-kind.)
• At least 3 digital images (JPEGs) or audiovisual files of the site, object, or form of
expression to be addressed in the proposed project

F. Development of curricula or educational materials for classroom use;
G. Archaeological excavations or exploratory surveys for research purposes;
H. Historical research, except in cases where the research is justifiable and integral to the success of the proposed project;
I. Acquisition or creation of new collections for new or existing museums;
J. Construction of new buildings or permanent coverings (over archaeological sites, for example);
K. Commissions of new works of art or architecture for commemorative or economic development purposes;
L. Creation of new or the modern adaptation of existing traditional dances, songs, chants, musical compositions, plays, or other performances;
M. Creation of replicas or re-creation of cultural objects or sites that no longer exist;
N. Relocation of cultural sites from one physical location to another;
O. Removal of cultural objects or elements of cultural sites from the country for any reason;
P. Digitization of cultural objects or collections, unless part of a larger, clearly defined conservation effort;
Q. Conservation plans or other studies, unless they are one component of a larger project to implement the results of those studies;
R. Cash reserves, endowments or revolving funds (funds must be expended within the award period [up to five years] and may not be used to create an endowment or revolving fund);
S. Costs of fund-raising campaigns;
T. Indirect costs or operating expenses, i.e. expenses incurred during the day-to-day operational activities of an
organization, such as office rent, utilities, license fees, and other costs for administrative time, services, or materials not
directly related to performing project work;
U. Contingency, unforeseen, or miscellaneous costs or fees;
V. Costs of work performed prior to announcement of the award;
W. International travel, except in cases where travel is justifiable and integral to the success of the proposed project;
X. Travel or study for professional development;
Y. Individual projects costing less than $10,000;
Z. Independent U.S. projects overseas.

Selection Process
All completed proposals must be received by the U.S. Embassy in Kampala, Uganda no later than January 12, 2017 for consideration under the 2017 Ambassador’s Fund for Cultural Preservation competition. The U.S. Ambassador to Uganda will chair a panel to assess all proposals received. That panel may nominate only one to three proposals from Uganda for consideration in the worldwide competition.

For further information regarding the Ambassador’s Fund for Cultural Preservation or for information on previously funded projects, please visit http://exchanges.state.gov/afcp.

COMPLETED PROPOSALS SHOULD BE SENT TO: