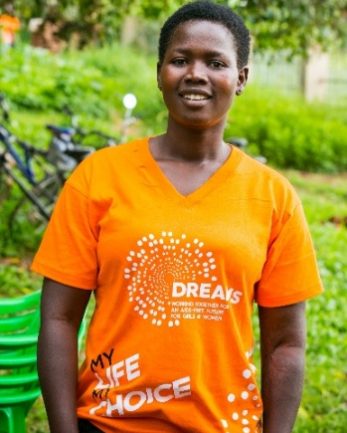 “HCT (voluntary HIV counseling and testing) is the most important service that I was introduced to,” says Sharon. “I can now talk freely about HIV prevention and can support any person in and outside my group still living in fear to come out and get care and treatment services from the health units.”

Sharon did not see anything wrong with her lifestyle. As far as she was concerned, she was living as any 23-year old woman should. Her life was characterized by party nights and having multiple sexual partners. With no other viable source of income, Sharon engaged in transactional sex to support this lifestyle. Despite having some knowledge of HIV/AIDS, she did not know her HIV status and lived without any fear of consequences due to her lifestyle.

In April 2016, Sharon’s life changed remarkably. She was invited by The AIDS Support Organization (TASO) to become a Determined, Resilient, Empowered, AIDS-free, Mentored, and Safe (DREAMS) woman. TASO—a community-based organization supported by USAID’s Strengthening Decentralization for Sustainability Program as part of the DREAMS Initiative—introduced her to the Stepping Stones curriculum in preparation for her peer educator role. The curriculum is designed to help communities understand how societal inequalities and injustices fuel the spread of HIV and combat the collective reluctance by communities to address these challenges.

After the training, participants—including Sharon—quickly realized that they need not engage in risky transactional sex to support themselves. They formed groups in their communities where they learned how to make and sell beaded handbags, and they started savings groups.

“My behavior has changed, claimed Sharon. Formerly, I was the chairperson of commercial sex workers in Gulu District… From the training, I realized that I was really going in the wrong direction. HCT is the most important service I was introduced to. I can now talk freely about HIV prevention and encourage my fellow peers still living in fear to come out and receive care and treatment services from the health units,” she added.

Since February 2016, USAID’s Strengthening Decentralization for Sustainability Program has collaborated with other USAID programs, local NGOs, and community-based organizations to map over 8,000 households, enlisting over 8,800 adolescent girls and young women who have been placed into 240 peer groups with trained peer educators. The groups provide a conducive environment to speak freely on matters relating to the promotion of sexual reproductive health and gender-based violence, ensuring that the HIV negative remain negative while those who are already infected are linked to health care services.

As a peer educator, Sharon supervises 50 fellow young women in two groups. One group is comprised of former sex workers, and the other is for child mothers. Her aim is to live her life as a role model for other girls and young women in her community.

“I help to distribute condoms to my peers—both boys and girls— linking the girls to family planning services and referring gender-based violence cases,” says Sharon.

USAID’s Strengthening Decentralization for Sustainability Program aims to improve the results and sustainability of decentralized service delivery, with an initial emphasis on HIV/AIDS services at local government levels in Uganda through four objectives: (1) Strengthening coordination of activities at the district and sub-county level; (2) Improving district management of resources and programs; (3) Providing financial support through grants to local governments for better service delivery; and (4) Establishing and supporting innovative approaches to sustain social sector service delivery. The program is made possible due to the support of the American people through USAID and implemented by Cardno Emerging Markets USA, Ltd. along with international and local partners.