The HIV epidemic in Uganda continues to disproportionately affect young women and girls, with the majority of new HIV infections occurring among this demographic. According to UNAIDS, in 2013, HIV prevalence among young people aged 15-24 in Uganda was estimated at 4.2 percent for women and 2.4 percent for men. This imbalance is attributed to gender-based violence (including sexual abuse), and lack of access to education, health services, social protection, and information about how to cope with these inequities and injustices.

Mary, now 23, was orphaned at the age of nine when her mother was killed by the Lord’s Resistance Army rebels in 2007. The rebels also killed her eldest brother, who was only 15. Life took a turn for the worse when her father remarried the following year. Mary says that she and her siblings were mistreated. She found out that her father was living with HIV/AIDS and was very sick, and this forced her to drop out of school in Senior 4.

“I became a sex worker for two years, selling my body to get money to look after myself and my siblings,” said Mary, adding that, even after quitting sex work, life was never normal for her again. “I used to cry a lot and hated myself,” she said.

In May 2016, USAID’s Strengthening Decentralization for Sustainability Program recruited Mary to train her as a peer facilitator in her community. Through an intensive curriculum dubbed “Stepping Stones,” Mary says she felt encouraged to support her peers. The curriculum focuses on understanding HIV, communication, gender, family planning, and other topics that empower girls and young women. As a result of the training, Mary tested for HIV in June 2016 and was found to be HIV negative.

“Now, I am strong-hearted. I can talk to other young women and girls about HIV prevention, treatment, and care services in my community,” says Mary.

Mary is one of 30 DREAMS (Determined, Resilient, Empowered, AIDS-Free, Mentored, and Safe) ambassadors in the three selected districts of northern Uganda: Gulu, Lira, and Oyam. DREAMS focuses efforts to prevent HIV among high-risk adolescent girls and young women by moving beyond promoting healthy behaviors and sexual and reproductive health to an approach that simultaneously addresses the structural drivers of HIV, including poverty, gender inequality, sexual and gender-based violence, and lack of education.

Since February 2016, when USAID’s Strengthening Decentralization for Sustainability Program started implementing DREAMS alongside other partners, the initiative has reached 20,778 households and enlisted 18,519 girls in the three districts. The DREAMS goal is to reduce new HIV infections among adolescent girls and young women by 25 percent by the end of year one and 40 percent by the end of year two.

USAID’s Strengthening Decentralization for Sustainability Program aims to improve the results and sustainability of decentralized service delivery, with an initial emphasis on HIV/AIDS services at local government levels in Uganda through four objectives: (1) Strengthening coordination of activities at the district and sub-county level; (2) Improving district management of resources and programs; (3) Providing financial support through grants to local governments for better service delivery; and (4) Establishing and supporting innovative approaches to sustain social sector service delivery. The program is made possible due to the support of the American people through USAID and implemented by Cardno Emerging Markets USA, Ltd. along with international and local partners. 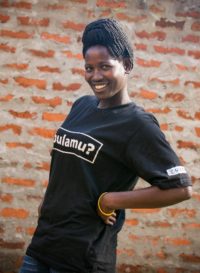