Congratulations to the 2017 PEPFAR Heroes! Recognized by Ambassador Malac at an awards ceremony on November 29, these individuals have dedicated their personal and professional efforts towards creating an AIDS-free generation in Uganda. 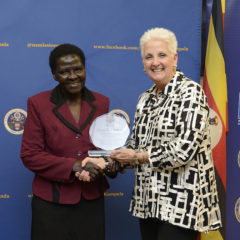 Awino Alice Othieno works at Buliisa Health Clinic as a mother-to-mother peer supporter with a specialization in Early Infant HIV Diagnosis. She also serves her community as a representative for People Living with HIV/AIDS. After Alice’s husband passed away from an unknown illness, she decided to get tested for HIV. She tested positive and immediately began treatment. Since then, Alice has dedicated her life to serving her community. For the past nine years, she’s worked as an AIDS community volunteer and an expert client in antiretroviral therapy.

In 2015, Alice created a household outreach program where she travels to the homes of new mothers who are vulnerable to having children born with HIV. Thanks in part to her efforts, early infant HIV positivity rates in Buliisa have reduced from 17% in 2016, to just 3.1% in 2017. 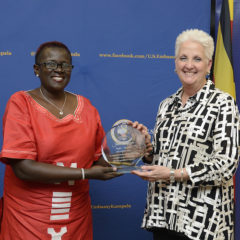 “Teacher Jane” Bayeza joined the Baylor College of Medicine’s Children’s Foundation in 2004 to work closely with HIV-positive youth. To raise their spirits, she would ask them to sing, and this practice eventually led to forming a children’s choir. Since forming in 2008, the “Singing Children,” as they are known, have become ambassadors and advocates throughout Uganda in the fight against HIV. The choir has grown to 30 children who are living with HIV; they have performed for presidents, ambassadors, and ministers. Through their music, they advocate for awareness, treatment, and positive living for those affected by HIV.

“Teacher Jane” loves directing the children through music and helping them explore their creative talents. She believes that this creativity and lack of idleness builds their minds, bodies, and spirits, as they deal with treatment. 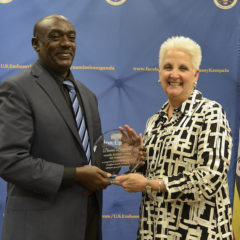 Benon Baguma has been supporting health education and promotion as a film van driver with the Uganda Ministry of Health since 1992. Benon has dedicated his life to fighting myths and misunderstandings surrounding HIV and other diseases through information sessions held in vulnerable regions throughout Uganda. In 2013, Benon took on the daunting assignment of promoting safe voluntary male circumcision at 11 regional hospitals. He now travels the country, sharing movies and messages through his megaphone, to communicate about the benefits of safe circumcision. 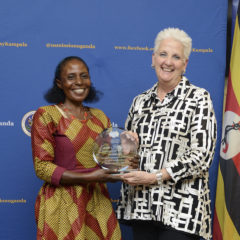 Eunice Kabagambe has made it her life mission to break this silence around HIV. In 2001, she disclosed her HIV status to a gathering of national and local leaders in Kanungu District. This unprecedented disclosure led to the creation of the Kanungu People Living with HIV/AIDS Network, with Eunice being elected secretary. This HIV/AIDS information network is now a pivotal resource center for hundreds of community members. Eunice has used this network to advocate for more ARV clinics in Kanungu.

Eunice also has a passion for helping HIV-positive children and has opened her home to children seeking medical treatment. Thanks to Eunice’s support, 13 HIV positive children, including four of her own, have survived and thrived from this. 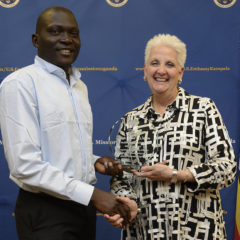 In the Nebbi District of Western Uganda, the dropout rate for deaf or hearing impaired school-aged children was 100%. Additionally, multiple rapes and assaults on deaf children had been reported. When Denis Paul Wargram learned of these issues, he made it his mission to help these children. In 2013, Denis became a founding member of Help Disabled Children Excel, a community-based organization with the mission to be an advocate for children with disabilities.  Denis has created multiple projects to protect and empower these children, including helping children gain financial independence through beekeeping.

Because difficulty in self-expression and lack of services can make deaf children more vulnerable to physical violence and HIV/AIDS, Denis has become an advocate for sign-language training among deaf families and communities. This year, he’s brought basic sign language skills to six teachers, four health workers, two police officers, and ten families with deaf children in the community of Nebbi. 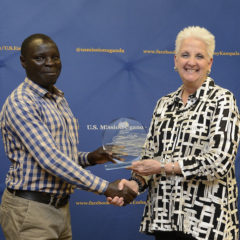 As the Executive Director for Community Wing for Sustainable Development, Emmanuel Osillo has been working for the past 15 years to stop the spread of HIV/AIDS in Uganda. Emmanuel works to unite stakeholders, community members, and local leaders in reducing HIV/AIDS prevalence among the transitory population in his region. He has created programs including community dialogues, HIV/AIDS classes in school, and the opening of a testing, care, and treatment drop-in center for transitory workers in the town of Malaba.

Emmanuel’s current goal is to help Ugandan men address stigma and discrimination surrounding HIV testing and treatment. He has recently created programs targeting boda-boda riders by creating game-show type activities that promote safe sex practices. These programs have captivated the community and have doubled the number of beneficiaries that previously attended these dialogues. 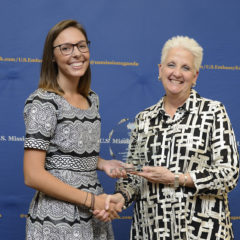 Kelly Sizemore is a Peace Corps Volunteer based in Gulu District. When Kelly arrived last year, she started a project that aimed to create a sustainable, holistic, and community-based approach to the HIV/AIDS pandemic. Instead of staying in Gulu town, Kelly pushed for work in underserved and difficult to reach villages. Through data collection, Kelly identified six of the most at risk communities, and formed six groups with over 90 members of HIV positive men and women. In partnership with local government, Kelly provided these groups with training on sustainable agriculture, business practices, micro-credit, and home based community care.

Kelly has also conducted trainings to at-risk teenage girls on menstrual health and hygiene. She has formed “sewing groups” and has taught them how to create reusable menstrual pads with the aim to break the barriers and bust the “myths” associated with menstruation. Kelly has also started soap making classes for HIV positive women in an effort to create economic empowerment amongst the communities.