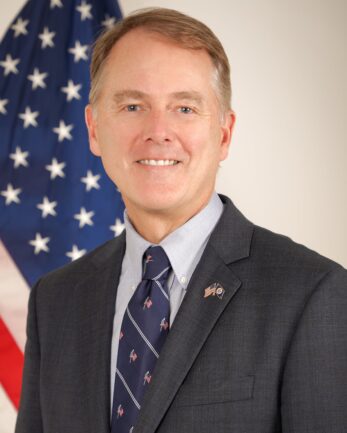 William “Bill” Bent, a Career Member of the Senior Foreign Service, is honored to serve as Deputy Chief of Mission at the U.S. Embassy in Kampala, Uganda.  Prior to assuming this role in August 2022, he served as Consul General in San Salvador, El Salvador (2018-2022) and Consul General in Bridgetown, Barbados (2015-2018).  Bill’s other overseas postings include entry-level assignments in Prague and Kingston, and a tour as the Chief of Visa Operations in Santo Domingo, where he led one of the State Department’s largest visa operations.  His domestic assignments in Washington, D.C. include serving as Chief of Diplomatic Liaison in the Visa Office, Jamaica/Bahamas Desk Officer, Career Development Officer for entry-level Foreign Service Officers, Outreach Division Chief for the Bureau of Consular Affairs, and as Chief of Post Operations within the Visa Office. Bill also served a tour in Kabul, Afghanistan as Executive Assistant to the Ambassador.

Bill received a B.A. in psychology from Boston University, an M.A. in International Affairs from The American University in Washington, D.C., and an M.S. in National Security Studies from the National War College.  He is married and has an adult son.  His wife, Jennifer Smith, is a former Vice President of National Geographic and the Co-founder of the Barbados Independent Film Festival.