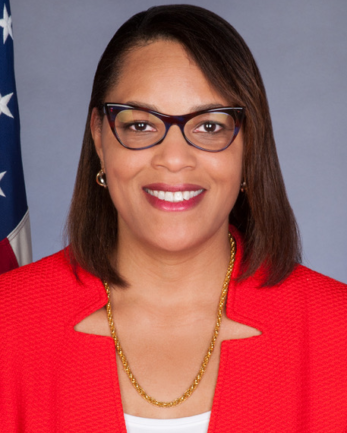 Natalie E. Brown, a career member of the Senior Foreign Service, class of Minister Counselor, was confirmed by the Senate as U.S. Ambassador to Uganda on August 6, 2020.  She previously served as the Chief of Mission of the U.S. Embassy in Asmara, Eritrea from 2016-2019.  Other senior leadership positions include Deputy Permanent Representative and Deputy Chief of Mission of the U.S. Mission to the UN Agencies in Rome, Italy from 2013-2016, where she was elected to represent North America on the Finance Committee of the UN Food and Agriculture Organization of the United Nations.  Ambassador Brown also served as Deputy Chief of Mission of the U.S Embassy in Tunis, Tunisia from 2010-2013 as that country transitioned from dictatorship to democracy.  Throughout her career, Ambassador Brown has garnered experience in both bilateral and multilateral diplomacy with a geographic focus on Africa and the Middle East.

Ambassador Brown’s previous assignments include service as the Economic Counselor of the U.S. Embassy in Amman, Jordan and as the Political Chief of the U.S. Embassy Kuwait City, Kuwait.  In Washington, she served  twice in the State Department Executive Secretariat’s Operations Center, including as a Senior Watch Officer on September 11, and as an International Affairs Officer in the Office of UN Political Affairs in the Bureau of International Organization Affairs.  Still earlier she was the State Department’s Desk Officer for Mali, Burkina Faso, and Niger in the Office of West African Affairs.  She also had assignments overseas in the U.S. Embassy Addis Ababa, Ethiopia, and in the U.S Embassy Conakry, Guinea.

Ambassador Brown earned her B.S from the Georgetown University School of Foreign Service and was awarded her M.S. from the U.S. Marine Corps Command and Staff College in Quantico, Virginia. She is an alumna of the International Career Advancement Program and was the first State Department participant in the International Women’s Forum Leadership Foundation Fellows Program.  Ambassador Brown speaks French and Arabic and has studied Italian, German, Amharic, and Tigrinya.