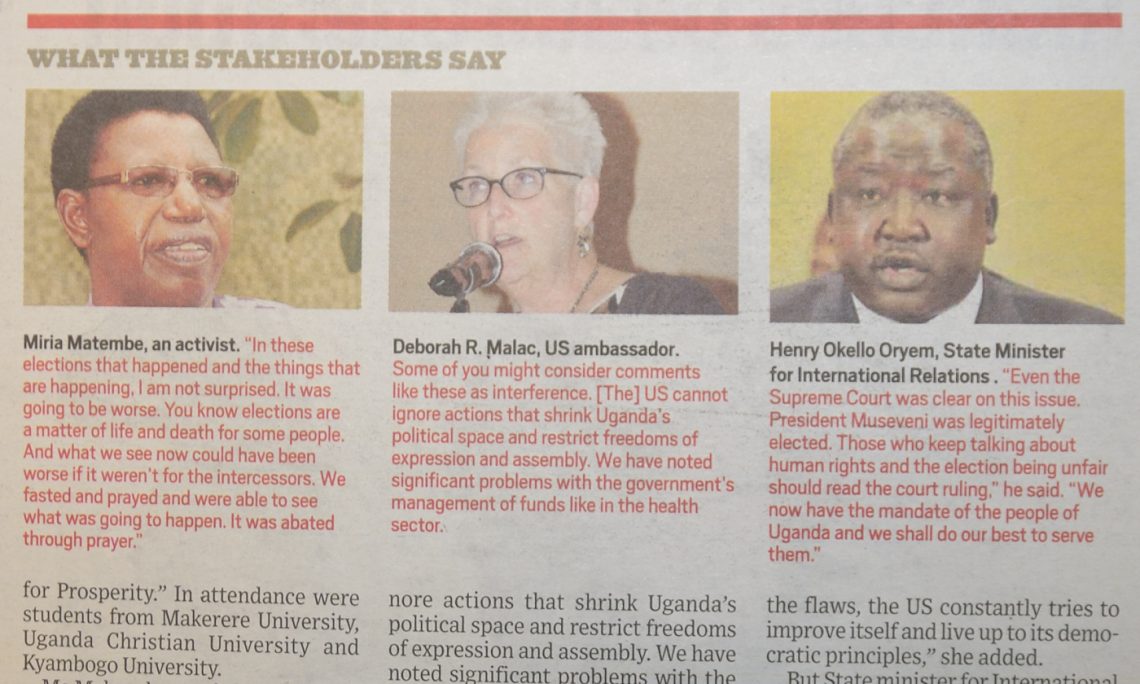 Good afternoon. I am honored and pleased to be here and to join the other guests today for this discussion on youth, democracy and governance. These are crucial issues that matter, not just to me or the United States. The future of Uganda is of course critically important to all of you, as the future leaders, innovators, and entrepreneurs of Uganda. I hope today that we can have an open and frank discussion on the state of Uganda’s democracy and governance. I also hope this is the beginning of an ongoing conversation that involves Uganda’s youth and the country’s development.

Let me begin today by talking about the recent elections. I arrived in Uganda just before February 18. I talked with young voters who queued for hours waiting for ballot materials. I saw and heard their frustration.

Many of you here have seen or read the statements either the Embassy or the U.S. government made concerning the elections. In them, we have expressed our serious concerns about the elections and their aftermath.

The social media shutdown, the detention of opposition figures, the harassment of media – all of these things combined with the poor organization of the election have weakened Uganda’s democracy and tarnished Uganda’s image as a strong democracy in a turbulent region.

We understand any government’s need to provide security, and Uganda has sadly known its share of threats both from inside and outside its borders. At the same time, the government has a responsibility to protect and preserve the basic freedoms of citizens. These rights are guaranteed in Uganda’s laws and constitution, and the government should not sacrifice these rights in the name of stability.

In a healthy and democratic society, the people, the press, and the opposition are not the enemy. An open political process and citizen participation in government strengthens a country, and a country that does not respect the rights and freedoms of its own people can never be truly secure.

I realize some of you might consider comments like these as “interference.” Let me reiterate, however, what we have said before: We respect the sovereignty of the government of Uganda, and we do not support any one individual or political party.

We have spoken out because we believe that the Ugandan people deserve to live in a country where every voice is heard and matters. That can only happen when citizens have a say in how their country is governed. It can only happen when government is held accountable. It is the democratic process that we support.

So where does that leave us after the elections? There are, I’m afraid, no easy answers.

For our part, the United States cannot ignore actions that shrink Uganda’s political space and restrict freedoms of expression and assembly. Our relationship with the Government of Uganda must be based on a shared respect for democratic values. That is the only way that it can grow.

But the United States is not going to walk away from the Ugandan people, especially its youth. We will continue to work with you to help build the kind of country you want to see. We have invested, and will continue to invest, in the health, education, and livelihoods of all Ugandans. We do this because such investments are critical to your futures.

Let me give you just a few examples of what this looks like. Just last week, we launched a literacy project to deliver more than 1.5 million books in English and local languages to Ugandan schoolchildren. Two weeks ago we awarded grants to three promising young Ugandan entrepreneurs to continue their work in renewable energy. And today, we are finishing the application process for a new program for young agripreneurs to help build and grow their businesses.

These initiatives will continue to benefit the Ugandan people. Our assistance, I must emphasize, goes directly to people and organizations in the field, not the government. The United States does not provide direct assistance to the government – for its budget, salaries, or other services.

We adopt this stance because we believe in the people, and believe our investments must go to Ugandans themselves. We have also noted significant problems with the government’s management of funds, particularly in the health sector. Last month’s shocking Global Fund audit documented – and not for the first time – millions of dollars wasted, missing, or unspent. This money should have gone to provide Ugandans life-saving medicines for HIV/AIDS prevention and treatment, malaria and tuberculosis. As a result of this mismanagement, many Ugandans will not receive these needed drugs.

Beyond just this audit, Ugandan experts have reported the numerous health crises facing the country’s children – stunting, malnutrition, and sexual abuse in schools. Nearly 20 percent of Ugandans have never attended school, and nearly a quarter go hungry every day.

These are not just abstract statistics. These figures represent lives that deserve better futures, better services, and better treatment from their leaders. A stronger democracy, and a government that is accountable to its people, will create an environment where all Ugandans can thrive.

The changes you want to see in Uganda can only come about through the hard work and dedication of people like you. I know many of you feel your voices don’t matter.

But I want you all to know this: The future of this country is not lost. It belongs to you, and you have the power to decide what kind of country Uganda will be.

I have had the opportunity to meet with many youth leaders in the short time I have been in Uganda. And I am truly impressed by their ideas on how to build their country. Yes, youth are frustrated. Many fear Uganda may never live up to its potential. But as I have told them, and will tell you now: That is simply not true. Uganda is filled with unlimited potential and energy, and you will be able to achieve great things. I believe it, and I hope you do, too.

Making that future a reality is going to take more than just talk. It will require a lot of hard work from the people in this room. But you are not alone. The people sitting all around you are not just your classmates and peers. These are your allies and partners. To bring about any kind of change in this country, you will need to work together. Each one of you is smart, strong and talented. I know it because I’ve seen it already. But together, working as partners, you will be unstoppable.

So what does all this mean in the context of today’s discussion about democracy and governance? For starters, it’s not just about politics and elections. Some of you have the skills and should enter politics, but that doesn’t just meaning running for office.

There are countless ways you can help make your country more democratic, more inclusive, and more prosperous. You can help a young girl learn how to read and stay in school. You can volunteer your time to care for the sick. You could help develop apps or write software that help citizens identify and end corruption. All these ideas contribute to building a healthier, more prosperous, and more inclusive society. I’m sure you have your own ideas for ways to improve Uganda’s democratic progress and governance, and I look forward to hearing those thoughts later today.

But the bottom line is that you must do something and take the responsibility upon yourselves to make things happen. I challenge all of you today to try and put your ideas into action, because by simply accepting the status quo, you only guarantee that things will remain the same.

Students worldwide often find themselves at the forefront of social change and reform. In the United States, the student movement in the 1960s led the protests against American involvement in Vietnam. Almost 50 years later, American students are leading new movements to raise awareness about racial and social inequality. Youth around the world are championing causes as diverse as environmental protection and anti-corruption. These youth are working today to create more inclusive and democratic societies where they live.

There is no reason Uganda’s youth cannot do the same. I have seen you take the initiative when facing seemingly impossible odds. Despite growing fears of election violence, young Ugandans organized a nationwide campaign called “I Pledge Peace” to spread a message of nonviolent participation. It was the youth again who quickly found ways to circumvent restrictions on social media to keep information flowing during the vote. That is the kind of power you have just in your own hands.

But the idealism of youth-led movements gets lost when youth resort to violence. Let me be clear: violence has no place in a democratic society – regardless of your position inside or outside government. I urge all of you to reject any calls or rhetoric that urge or encourage violence.
I imagine some of you must be thinking: who is the United States to tell us how to run a democracy? I will readily admit that my country is not perfect. Democracy is often messy. But despite its flaws, the United States constantly tries to improve itself and live up to its democratic principles. We do this because we know that without democracy, we cannot have lasting economic prosperity and security.

Ugandan democracy does not have to look like the democracy in the United States. It is up to you to decide how Uganda defends the rights of all its citizens. But there are basic elements that should be present.

These include protecting the right to free expression and assembly, ensuring freedom of information and the press, and treating all people with dignity and respect. It is our hope that Uganda will make the right choices that guarantee such principles not just exist, but flourish.

I sincerely hope that during my tenure in Uganda, we will forge new friendships, strengthen existing cooperation, and create new opportunities by working together. I know this is not an impossible task, because I have already seen how creative and energetic young Ugandans really are.

I look forward to hearing your thoughts and comments after the presentations from our panelists later today. I hope this will be the first in an extended series of conversations with you about how you can play a role in shaping Uganda’s future. Thank you.