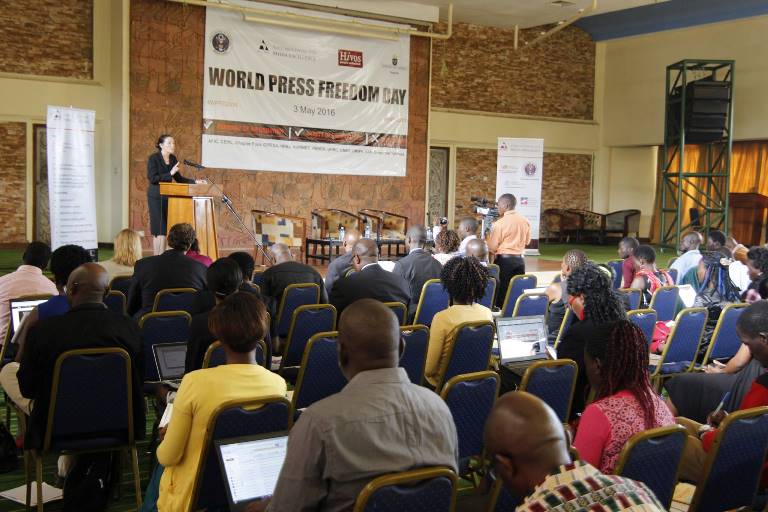 Good morning.  I am honored to be here today to mark World Press Freedom Day. Ambassador Malac couldn’t be here because she is visiting some of our programs in Gulu and Arua, but she is here with us in spirit, as she is an ardent support of media freedom.

The themes for this year’s World Press Freedom Day – securing access to information, defending the press against censorship, and ensuring the safety of journalists – are more relevant than ever. We are unfortunately reminded daily how dangerous and difficult the work of the media has become.  Journalists around the world continue to be jailed, harassed, beaten, and even killed – just for trying to do their jobs. In fact, according to Reporters Without Borders, last year witnessed a “deep and disturbing” decline in respect for media freedom.

Everyone knows the U.S. Constitution protects freedom of the press.  But does that mean that we have never, in our history, passed laws that affect the freedom of the press, especially during times of war?  No.  Have the legality of those restrictions been challenged and debated, including up to the Supreme Court?  Yes. Have some U.S. politicians in the past tried to halt publication of papers that attacked them?  Yes.

The reason, I think, that freedom of the press comes so frequently under attack is because the press, when it works the way it should, provides people–voters–with information they did not already know or a point of view maybe they hadn’t thought of.  And sometimes other people–the ones who did know the information and were holding it–don’t want the information shared for a number of reasons.  For example, the question of how to balance press freedom with national security is one that we continue to debate in the U.S.  And over the past decade, with the rise of social media and Internet availability, it has become far more challenging to know where exactly that balance exists.  But part of being a democratic society is being able to have an open debate about these questions and having an independent judiciary that can help resolve those gray areas.  And even though I’m proud of our record in the U.S., there are some who think we could do better.   Freedom House’s 2015 report on freedom of the press in the U.S.  notes that while we have has some of the strongest protections for media independence, there are still some areas that could be improved.

In general, however, and with limited exception, our Supreme Court has upheld the principle that James Madison, one of our Founding Fathers, defended by saying, ” . . . to the press alone, chequered as it is with abuses, the world is indebted for all the triumphs which have been gained by reason and humanity over error and oppression” and that the United States owe to the press “much of the lights which conducted them to the ranks of a free and independent nation, and which have improved their political system into a shape so auspicious to their happiness.”   What James Madison was telling us, more than two centuries ago, is that the benefit of having information, the light that a free press can shine on “error and oppression” outweighs the cost of the possible “abuses” a free press might commit:  that too much information is almost always better than too little information.

In Uganda this year’s elections saw infringements on the rights of media. Uganda’s security services sometimes prevented journalists from covering opposition candidates. Journalists sometimes were detained for trying to report on demonstrations or the state of the country’s hospitals. More than three dozen Ugandan journalists this year alone have been victims of assaults in the course of performing their jobs.  And we remember all too well the government’s decision on February 18 to shut down social media and mobile money sites.

The proposal to amend the Communications Act is another example. This proposal is troubling not just because it eliminates Parliament’s constitutional oversight role.  It would also give government unchecked authority to control Internet access without having to justify its actions.

If we limit press freedom, what happens to democracy?    Are we  really  more secure?    As Mark Twain once said, “A newspaper is not just for reporting the news; it’s to get people mad enough to do something about it.”    A democratic government is supposed to be accountable to the people who voted it into power, and a free press informs voters about what is happening in their government and what is going on in the world around them so that they can say to their elected leaders, “Hey!  Fix this!”  That’s why a free press is essential to democracy, no matter how young or old it may be. Media plays a critical role in ensuring fairness, accountability, and responsibility among elected officials.  It shines a light on corruption and is the champion of the disadvantaged and the voiceless. That’s why freedom of the press is enshrined in both the U.S. and Ugandan Constitutions.   Yes, the media may be – and often is – an irritant to governments around the world, but it is not the enemy. Labelling the press as traitors or disloyal to the country or the government undermines not just the strength of the media, but the strength of democracy as well.  If a country’s media is under threat, its citizens’ rights are under threat.

But the issue of press freedom is not just about human rights; it’s also good business.  What company would want to invest in a country where the government can shut down the Internet at any time for any reason? What company would want to risk its own bottom line, its own social media presence, its own online business, and operate in a country that does not respect the right of citizens to access information?

I’ve talked about what the government should do to protect press freedom, but the government isn’t the only one with a responsibility. Members of the media must do their part and respect the important public trust they hold and the responsibility their work entails. We all know instances of biased, unfair, unbalanced, or simply false reporting. Today, anyone with an Internet connection and a smart phone can post anything, anytime, anywhere. But that is not journalism. It does not involve sources, facts, or verification. It is, more often, gossip and innuendo – and ultimately harmful to the media’s reputation and credibility. When journalists and editors ignore their responsibility to verify their stories and report accurately, they undermine the integrity of their profession and the trust that people place in them.  And integrity and credibility are the linchpin of professional journalism.  If you don’t have credibility, people won’t believe what you write.  They won’t trust your analysis.  They won’t value your viewpoint.   The public needs journalists to inform them, but journalists also need the public to read what they write, so it’s a two-way street and we all have a responsibility.

Freedom of the press is one of those fundamental rights that Americans consider part of their identity.    And it is why the U.S. Mission has for years funded training programs for hundreds of Ugandan journalists, on topics ranging from investigative reporting to media ethics. Today, I’m proud to announce our newest initiative that we’ll launch later this year: a one-year training program for 300 journalists around the country, to help improve reporting skills and use of social media, and help build a sustainable nationwide freelance journalists association.  We hope this project will not just help strengthen Uganda’s press corps, but provide more and better information to Ugandans who will benefit from improved reporting on governance, human rights, health, and other crucial issues.

I thank you again for inviting me to join you today and for the important work that all of you do every day to keep people informed, aware, and accountable and to keep democracy working well.