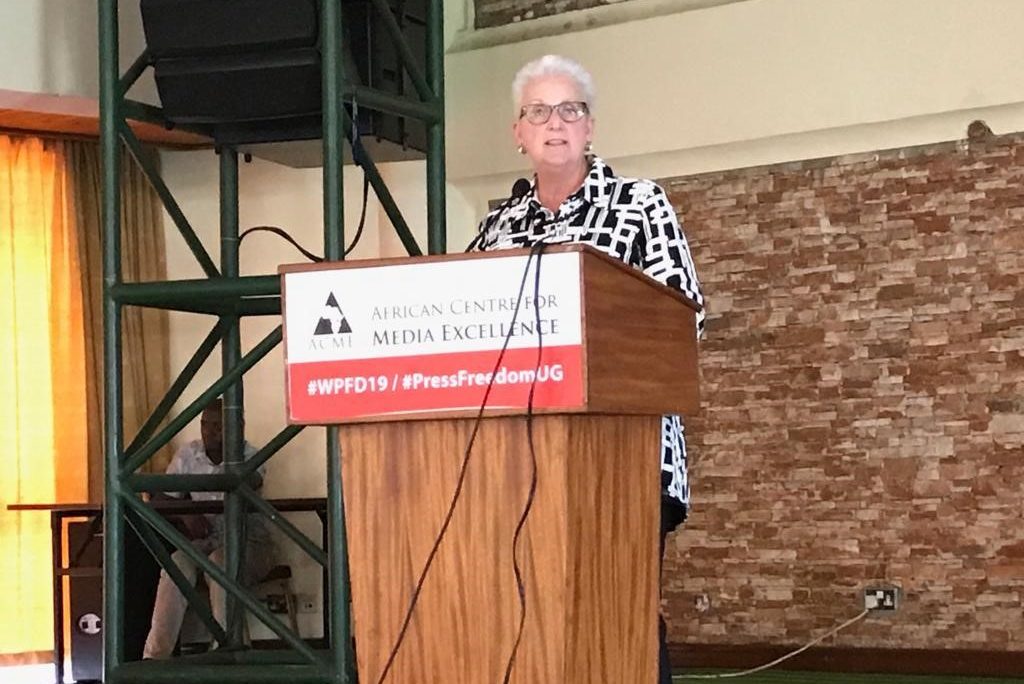 As Prepared for Delivery

Representatives of the Electoral Commission of Uganda;

Representatives of the Government of Uganda;

The Media fraternity, colleagues, and friends;

Good morning.  It is truly an honor to be with all of you to celebrate World Press Freedom Day.

As I thought about the significance of this day, I remembered the motto of The Washington Post, one of the most popular newspapers in the United States.  The motto reads: “Democracy Dies in Darkness.”  That phrase can be interpreted in different ways.  But to me, it means that democracy can only survive if there is a free flow of information.  And that spread of information depends on a free and strong media environment.

Today is a chance for us to rededicate ourselves to the cause of protecting the rights and freedoms of journalists around the world.  It is an opportunity for us to come together and speak up strongly in support of the rights of freedom of expression and assembly.  These are rights protected by the Ugandan constitution, the U.S. constitution, and indeed in countries around the world.

I am very proud that the U.S. Embassy is helping to sponsor today’s event, as well as an upcoming regional dialogue in Lira, and I hope that the discussions today will strengthen our collective ability and commitment to improving press freedom in Uganda.  Thank you so much to the African Center for Media Excellence and all of the partners who have made this event possible.

I know I may be preaching to the choir here, but as we begin today’s program, I think it bears focusing on the importance of a free press in a democracy.  The media plays a critical role in ensuring fairness, accountability, and responsibility among elected officials.  It shines a light on corruption, thereby contributing to transparency and good governance.  It is the champion of the disadvantaged and the voiceless.

Of course this all makes sense on paper, but in practice, it doesn’t always work out this way.  No country, including my own, has a perfect record with press freedom.  There is a natural tension, at times, between a country’s government and the media.  But that is the way it’s supposed to be.  A democratic government should truly want its media to be strong enough to challenge the government when it may be at fault, but at the same time be honest enough to applaud the government for a success.  These are the ideals we should be striving for.

Freedom of the press is not only a fundamental issue to democracy; it is also central to a country’s development.  In today’s era of globalization, with companies diversifying their investments around the world, a country that restricts access to information, internet, or social media is highly unlikely to attract investment.  Businesses want to operate in countries where access to information is respected.

Unfortunately, in Uganda, press freedom is under assault.  Just two days ago, the Uganda Communications Commission ordered 13 radio and television stations to suspend 39 staff on allegations of breaching minimum broadcasting standards.  And yet the UCC did not specify which content did not meet these standards.  What does minimum broadcasting standards even mean?  It appears that TV and radio stations are under assault from the government simply for doing their job of reporting live news.

In Reporters Without Borders’ 2019 World Press Freedom Index, Uganda dropped 8 places to a ranking of 125 out of 180 countries in the world, compared to 117 the previous year.  As the report noted, acts of intimidation and violence by security forces against reporters are an almost daily occurrence in Uganda.  The situation is even worse outside of Kampala, where security officials routinely prevent journalists from covering events and often arrest and rough them up.

Beyond that obvious violation of press freedom, other recent trends to curtail freedom of expression are very concerning.  Many media houses and radio stations have been closed recently based on content they have broadcasted.  The UCC has levied new fees on media houses, and has ordered media houses either to broadcast or not to broadcast specific content.  And the government has just recently proposed new regulations that would significantly restrict freedom of expression for artists.

This repression of the media has long-lasting negative effects.  As a means of protection, journalists in Uganda are increasingly resorting to self-censorship.  Government censorship combined with media self-censorship means that citizens are getting less truthful and less accurate information than they deserve.

All of these infringements on the media and freedom of information send the wrong message to Ugandans.  At a time when more and more Ugandans want a say in how their country should be governed, efforts to restrict the press and people’s access to information are a big step in the wrong direction.

Freedom of the press takes on an even greater significance in election periods.  This year’s World Press Freedom Day theme of “Media for Democracy: Journalism and Elections in Times of Disinformation” is a timely one for Uganda as the country begins preparing for the 2021 elections.

For an electoral process to qualify as free and fair, citizens must have access to sufficient information about the parties, candidates, and voting procedures in order to make an enlightened and valid decision at the ballot box.  Elections will only be free if all parties can express themselves – that includes candidates, political parties, citizens, civil society, and of course, journalists.  Free, independent, and professional journalism can hold officials to account for the integrity, peace, and fairness of an election.

Unfortunately, in Uganda’s 2016 election as well as subsequent elections, there have been multiple restrictions on the rights of media and access to information.  During the 2016 election, social media sites were blocked on the day of the election.

Security officials have harassed and beaten journalists trying to cover election-related rallies and events, and they have prevented journalists from covering opposition candidates.  As one of many examples, in August of last year during the Arua by-election, security forces arrested NTV journalists Herbert Zziwa and Ronald Muwanga in Arua for covering political rallies and confiscated their equipment.  The journalists were beaten up and charged with inciting violence and malicious damage to property, and Zziwa was admitted to the hospital.

I could go on, but the point is that sadly, when it comes to press freedom in Uganda, things are getting worse.  So what can we do about it?  Well, today is a good start.  Our coming together and reaffirmation of our commitment to supporting press freedom and Uganda’s journalist community is essential.

We of course must use our collective influence to urge the government to improve its record.  Today, as we have done in the past, the United States strongly urges the Ugandan government to take action to protect and defend press freedom, and to hold individuals who violate this freedom accountable.  We also urge all political leaders and citizens to advocate for the protection of journalists and their vital role in a democracy.  There has to be more of a public outcry when we see flagrant abuses of journalists occur.

It is also essential that we work together to strengthen the journalist community in the face of the many challenges they face, and the U.S. Embassy is absolutely committed to this.  Through both State Department and USAID-sponsored trainings, over the past year we have trained almost 300 journalists in reporting on issues of democracy, governance, transparency, and human rights.  These trainings have also focused on personal and digital security, and media laws and ethics.  We are also committed to promoting media freedom by improving access to justice for journalists.  Last year USAID provided legal aid support to 23 journalists who had experienced prosecution and harassment.  And as the 2021 elections approach, we hope to provide much-needed assistance to journalists to enable them to report on elections in a comprehensive and accurate manner.

And now to speak directly to the journalists in the room:  You have a very important role to play as well.  I encourage you to ensure that your reporting is fair and factual – this goes for reporters and editors alike.  And I urge you to make sure you are fact-checking your work and quoting officials accurately.  These are the types of best practices that will bolster your credibility, preserve the reputation of journalists in Uganda, and earn the trust of the Ugandan public.  I also encourage you all to form strong media unions that will advocate for your rights.

But most important of all, as I conclude, I want to thank all the journalists here.  Thank you for what you do to make Uganda a stronger democracy.  Thank you for your courage in the face of extreme adversity.  You have chosen a profession that is difficult for many reasons – low pay, tough working conditions, harassment, and danger – just to name some.  But you have chosen a profession that is incredibly important, and one where you can make significant contributions to the development of your country.

I encourage you to stick with it.  Keep up the good fight.  The U.S. Embassy will be your committed partner.  We need you.  Uganda needs you.

Thank you once again for having me today, and I wish everyone a happy and successful World Press Freedom Day.