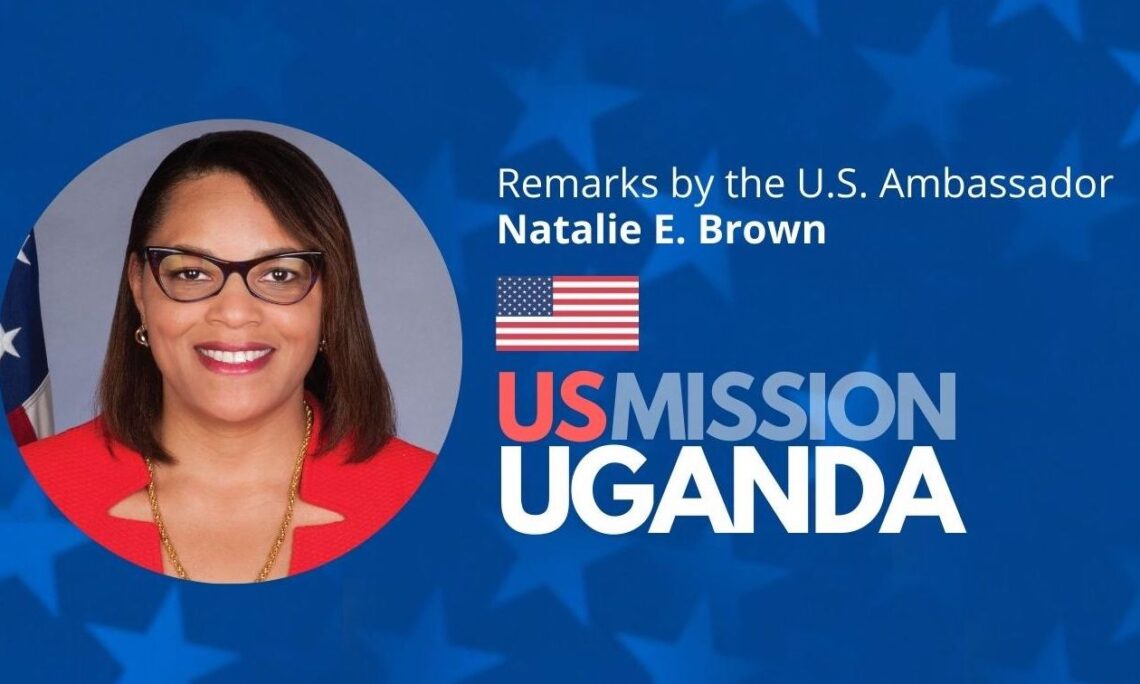 On behalf of the United States Mission in Uganda, I am pleased to participate in today’s launch of the CITES e-Permitting System. The United States is honored to be part of this initiative. Uganda is known for the diversity of its wildlife and even during difficult times like this global pandemic, the sector continues to attract tourists, to create jobs, and to contribute to the economy. Conserving wildlife and promoting the sustainable use of natural resources is critical for present and future generations, and I want to recognize Uganda’s efforts in this area.

Ratified over 40 years ago, the Convention on International Trade in Endangered Species of Wild Fauna and Flora, or CITES, aims to ensure that international trade in specimens of wild animals and plants does not threaten the survival of the various species. It is one of the many conventions to conserve wildlife and promote sustainable natural resource use to which the United States is a signatory. Wildlife conservation is essential to the national economy of almost every country, and well-regulated government systems like the CITES e-permitting system provide a solid foundation for economic development.

In recent years, Uganda has made significant strides with its policies on wildlife conservation. I applaud the Government of Uganda for developing a national strategy to combat poaching, illegal trade, and trafficking of wildlife and wildlife products. These advances provide an example and set a precedent for many other countries across the continent.

Through the proper regulation of the wildlife trade, countries like Uganda can guarantee sustainable economic benefits and secure livelihoods, all while protecting ecosystems.

We all know ecotourism generates much revenue for the government of Uganda. To complement this, the legal trade of wildlife products, if well regulated, has the potential to directly and positively impact local communities. Facilitating such trade will make illegal trade and poaching less attractive and lucrative and would go a long way in reducing poverty in rural areas, and significantly transform the livelihoods of communities adjacent to the national parks.

The online CITES e-permitting system will not only simplify the permit application and issuance process, but also provide a mechanism for verifying wildlife permits at any international point of entry. This system will reduce paperwork considerably, make administrative processes more efficient, and increase transparency.

This transparent system will also greatly reduce fraud and corruption in the wildlife trade by making the movement of products more traceable. Legal trade thrives on well-managed administrative systems and sustainably managed ecosystems. We are proud to be associated with this initiative.

As Uganda has been internationally labeled as a conduit for illicit wildlife products, I am pleased to see that curbing illegal wildlife trade, including any associated corruption, is a top government priority.

The United States, through a whole of government approach including USAID and other agencies, is committed to making it harder for poachers, traffickers, and dealers to engage in wildlife crime. USAID/Uganda’s Combating Wildlife Crime Activity, which facilitated American assistance for the development of the CITES e-permitting system, is one of several interventions we are supporting to reduce wildlife crime and to improve natural resource management here in Uganda. It is one of three biodiversity programs we support that help fight wildlife crime, empower communities to manage their natural capital, and promote viable alternatives to illegal hunting and incursion into natural areas. During my Earth Day trip to Murchison Falls National Park, I was happy to see some of these USAID-supported interventions in action. The establishment and use of beehive fencing, for example, helps to address human-wildlife conflicts while generating income for communities living adjacent to Karuma wildlife reserve. The canine unit based at this reserve is doing a great job to combat wildlife crime, and wildlife scouts are helping to reduce human-wildlife conflicts in unique and innovative ways.

Succeeding in the fight against wildlife crime will require the government’s continued commitment, demonstrated by better resource allocation, transparency, and accountability. Moreover, the government of Uganda must make the fight against corruption, including within the trade in natural resources and wildlife, a top priority. Without government commitment and support, systems, tools, and technology such as the CITES e-Permitting system being launched today will add little value. Given the lucrative nature of wildlife trade, the integrity of those entrusted with the responsibility to manage resources is vital to combat illicit activities.

I would like to thank the Ministry of Tourism, Wildlife, and Antiquities and the stakeholders represented here for their cooperation and diligence in ensuring that partnerships, such as this one between the United States and the Government of Uganda, result in sustainable outcomes. Not only will the CITES e-permitting system help combat the illegal wildlife trade, but it will also transform the conservation sector to ensure sustainable and accelerated growth in legal wildlife trade.

I once again thank you all for this significant achievement and hope we can celebrate more milestones in the near future.