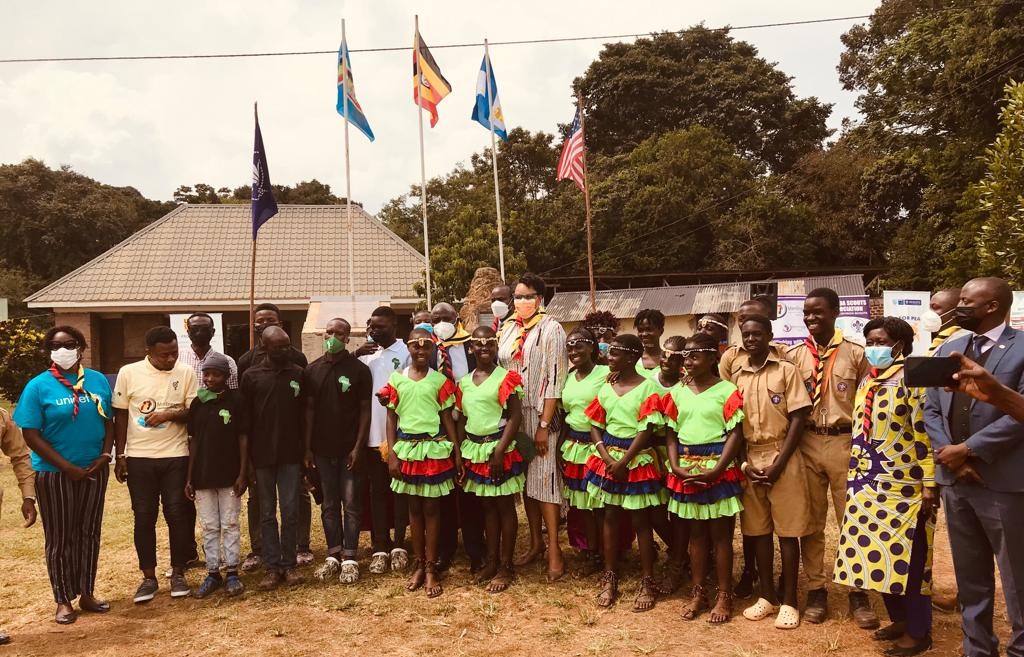 Good afternoon to all. It is a privilege to be here with you all today to recognize International Men’s Day. I commend you for your focus on the critical issue of improving gender relations and promoting gender equality for all.

The world is changing, and societal norms are shifting all around the globe, although at different paces. It is essential to recognize that humans don’t change their behavior overnight, and an entire society cannot shift its behavior if we leave one-half of the population out of the conversation. We cannot expect to improve gender relations and achieve gender equality unless we engage men and boys, as well as women and girls. We must all come together and work toward equality for all.

Few things perpetuate poor gender relations and gender inequality more than violence. In fact, next Thursday, November 25, marks the start of the annual 16 Days of Activism Against Gender-Based Violence. During these 16 days, the world collectively recognizes that gender-based violence is a problem that takes many forms, and that no form of gender-based violence can be tolerated. The timing of today’s event is a perfect precursor to the 16 Days campaign. Gender-based violence is not only focused on girls and women but on anyone who endures violence due to their gender. Violence does not discriminate; it can happen to anyone, anywhere, anytime.

However, children are the most vulnerable among us, completely dependent on others for their needs and protection. This makes children the most likely to suffer violence and human rights abuses, often at the hands of those they depend on the most.

The Uganda Violence Against Children Survey (UVAC 2015) found that 75 percent of Ugandan children experience some form of violence during childhood. That is a shocking figure. Research shows that the bulk of this violence is occurring in places that should be safe and is committed by people like parents/relatives, teachers, friends, and trusted community leaders whom those children should be able to trust most.

In theory, changing this in Uganda and globally should be easy. Don’t physically harm your children. Protect their bodies from sexual violation. Teach them their rights and how to protect themselves. Children, however, only know what they have experienced, and the real struggle lies in the fact that abuse is often part of a cycle. When this cycle carries on for generations, violence and abuse become normalized. This normalization in Uganda is evidenced by the Uganda Child Violence Survey finding that 50% of both males and females believed it was acceptable for a man to beat his wife in one or more circumstances.

Today’s theme, “Mentoring Adolescents into becoming Gentlemen,” is a critical component of changing behavior, but only if the gender norms and cycle of violence against children are addressed. As the theme suggests, boys need to be mentored into becoming gentlemen, and this begins when they are children with how they are treated, and the behavior they witness at home and in their communities.

We must all work in our homes and communities to begin shifting these social behaviors and norms. Just this past May, I was proud to inaugurate the U.S.-funded “No Means No” program designed to do precisely that — prevent violence against children in Uganda! The program, implemented through the United States Agency for International Development (USAID) and the U.S. Centers for Disease Control and Prevention (CDC), is equipping young women and girls, as well as 7,000 young men and boys, in three districts with skills to prevent and counter gender-based violence using the globally recognized “No Means No” education curriculum.

This curriculum promotes healthy relationships among children while also addressing social norms that contribute to violence. The educational program for children aged 9-17 years old is delivered through two three-hour modules that teach girls verbal and physical skills to prevent sexual assault and that teach boys to challenge rape culture, practice consent, and learn about bystander intervention. Through the engagement of both boys and girls, this violence prevention program creates a culture of mutual respect that drives generational change.

And it is vital to engage boys in conversations that support breaking the cycle of violence against women and girls. Boys who witness their fathers beating their mothers are more likely to copy this behavior when they grow up. Interpersonal violence is a tragic cycle that impacts future generations, as well as the current generation. But we can change that by helping boys and men become “gentlemen” and advocates for equitable relationships.

The “No Means No” program is part of the more extensive five year $150 million USAID Integrated Child and Youth Development project that has a multifaceted, holistic approach to strengthen young people’s ability to address their health and safety needs and improve the likelihood of reaching their full potential through improved education and health services. The project will also strengthen child protection systems to ensure children are protected, safe, and healthy in their homes, schools, and communities. Implementing the “No Means No” curriculum strengthens the overall system by working with children to equip them with self-protection and prevention tools.

The U.S. government is also proud to support other programs in Uganda, such as Grassroot Soccer programming through the Peace Corps and “Coaching Boys into Men” through CDC’s contribution to the INSPIRE initiative. These programs use sports to provide critical life skills to boys and young men, while also teaching them about gender norms and healthy masculinity.

Through the U.S. President’s Emergency Plan for AIDS Relief (PEPFAR), Uganda uses the Youth, Adolescents, and Peer Support (YAPS) model to empower young men living with HIV to be leaders who will eliminate HIV-related stigma among their peers and who help others living with HIV to seek life-saving care and treatment. PEPFAR also funds critical TB prevention and treatment in Uganda, which has the greatest gender disparity in the world for men contracting TB.

In closing, let me acknowledge that the isolation of and stigma experienced by victims of violence remains strong–but we can work together to ensure that individuals receive the support they need from those around them. Just because women are more frequently victims of societal injustices and human rights violations doesn’t mean that we should fail to acknowledge and help the boys and men who have also been victims. Unfortunately, each of us likely knows at least one person who has been a victim of GBV and if you do, offer them your assistance. If people around you think violence is normal and acceptable in any of its many forms, then create awareness, educate them, and encourage them to open and change their minds. For example, I attended one of the “No Means No” training modules which gave one young man the confidence to speak about the abuse he had suffered – something he had normalized. By speaking up, he was able to get the care he needed and educate those around him, changing his life and the lives of the boys and young men in his community.

Allow me to end by saying thank you to all of the boys and men who are here today who have never perpetrated violence on another, who have overcome violence in their lives, who work against stigma, and who stand here today as role models for others. Children grow up to become adults in the same positions of power as those of us here today, and if they do not have role models who help protect them now, they will not be role models who help protect others in the future. Abuse is a cycle that must be broken…let today be the beginning of its end in this community!