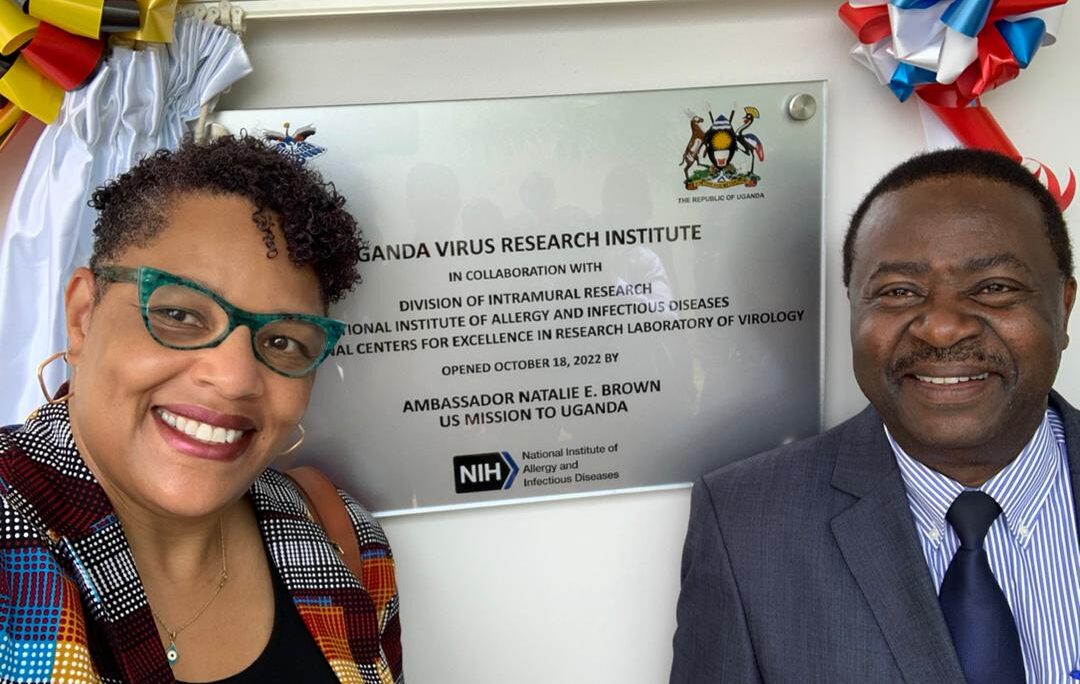 Good afternoon.  It is a pleasure to be here with you.  I am honored to open the new Laboratory of Virology supported by the National Institute of Allergy and Infectious Diseases of the U.S. National Institutes of Health and the Uganda Virus Research Institute.  The United States is proud to partner with UVRI to expand Uganda’s ability to develop countermeasures to protect populations against dangerous pathogens.  For over six decades, the United States government and the American people have partnered with Ugandan institutions and the Ugandan people for the benefit of the Ugandan people.  UVRI is particularly special because the relationship goes back all the way to 1936 when the International Division of the Rockefeller Foundation established the Yellow Fever Research Institute.  So it’s truly an honor to be here today and the partnership is further expanded.  Thank you for coming to show your support for the important work this next generation of scientists is doing.

The International Centers for Excellence in Research program was established by the U.S. National Institutes of Health (NIH) in 2002 with a goal of establishing partnerships with scientists and institutions in disease-endemic countries.  This has resulted in a longstanding and highly successful partnership with UVRI and the Rakai Health Sciences Program, providing evidence-based strategies for HIV treatment and prevention.  Building on this success, the Disease Modeling and Transmission Section of the Laboratory of Virology has established this new research laboratory at UVRI, whose focus will be on vector-borne zoonotic pathogens via a “One Health” concept that incorporates human and veterinary health considerations.  For those of you here today like me who are not scientists, zoonotic diseases are illnesses that can spread between animals and people.  Vector-borne, means pathogens spread by vectors like mosquitoes, ticks, and fleas.  Many emerging and re-emerging vector-borne pathogens are endemic in Uganda, such as Crimean-Congo hemorrhagic fever virus, which has recently been detected in Uganda, Rift Valley fever virus, chikungunya, and yellow fever.  These viruses are priority public health concerns and cause significant public health and veterinary health costs.  It is essential to have a more comprehensive understanding of the ecology of known and unknown vector-borne zoonotic pathogens to produce an accurate risk assessment for local and global human and animal health.

A key component of this effort is establishing collaborations with in-country researchers to build research capacity to bolster Ugandan public and veterinary health.  The Laboratory of Virology scientists have established collaborations with Dr. Charles Ndawula of the National Livestock Resources Research Institute to conduct field surveillance studies at the farm-wildlife interface.  Initial efforts will include sampling domestic and wild animal species in Ugandan farms to assess disease prevalence.  Research studies will also include surveys to identify disease prevalence in rural Ugandan populations.  Cumulatively, this body of knowledge builds a comprehensive understanding of pathogen circulation in vectors, wildlife, domestic animals. and the humans that interact with these animal populations.  This effort will support local Ugandan public and veterinary health while also supporting the mission of the NIH to use research to prevent infectious diseases and future outbreaks.

I will close by thanking the UVRI, the Ugandan Ministry of Health, and all the research staff involved in these projects for their hard work, dedication, and partnership with the U.S. Government, which has enabled so many important projects to flourish and supported Ugandan scientists to lead in their efforts improving health for all.  As we have for the past 60 years, we will continue to work towards a brighter future, together.