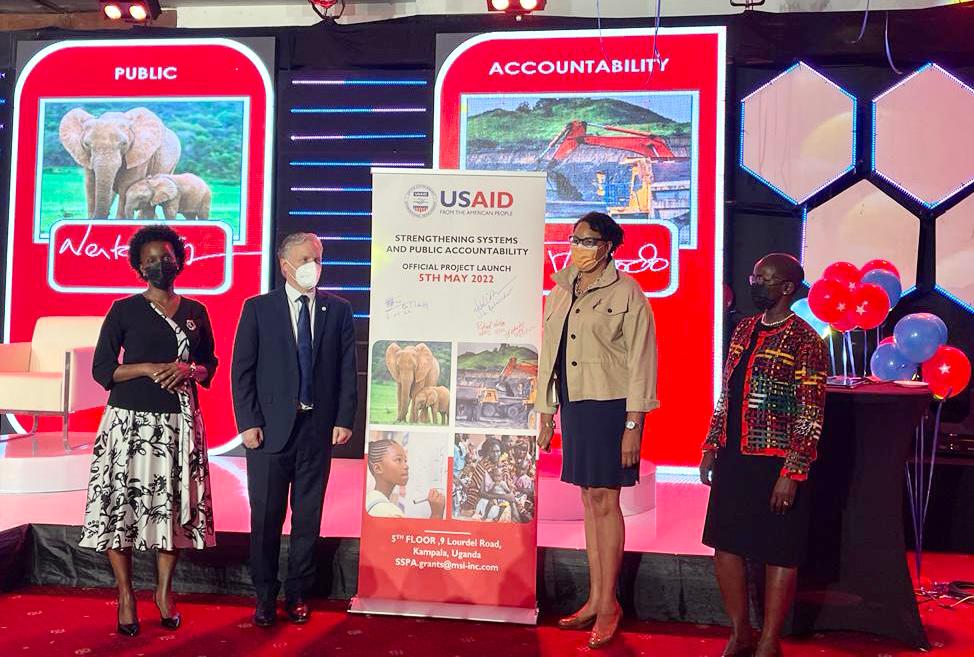 It is a pleasure to be here to launch USAID’s [U.S. Agency for International Development] Strengthening Systems and Public Accountability project.  Looking around the room and knowing that each of you is taking the fight against corruption seriously demonstrates the possibilities of what can be achieved if we all say NO to corruption and YES to accountability.

We all know that corruption fundamentally undermines progress in all sectors—whether it be health, education, economic growth, or building resilience to climate change.  Every year, corruption robs developing countries of an estimated $1.26 trillion, while destabilizing societies, undermining the rule of law, and diminishing the integrity of democratic institutions.

A recent study, commissioned by the Ugandan Inspectorate of Government on the Cost of Corruption, shows that every year, Uganda loses about 9.14 trillion shillings ($2.56 billion) to corruption. This is equivalent to 44 percent of total government revenue in 2019.

Where is this corruption occurring? According to the Cost of Corruption study, approximately 2.3 trillion shillings ($650 million) is lost annually due to absenteeism in the health and education sectors.  This absenteeism denies public access to services while employees get paid for work they are not doing.  Additionally, about 614 billion shillings ($173 million) was lost to corruption in procurement.

Corruption worsens poverty and aggravates inequality, as resources meant for the poor and the underprivileged are diverted to line the pockets of the corrupt.

Research conducted at the University of Denver shows that, in the long-run, improved governance will benefit Uganda’s gross domestic product and government revenues more than will the expected proceeds from oil production in the coming years. According to their forecast model, by 2035, $2.4 billion in annual revenue generation from improved governance could surpass the $2.2 billion generated from oil production.  This would lead to a cumulative increase of $33.5 billion by 2040, compared with about $26.8 billion from oil.  Think about that.  This analysis shows that improved governance–including reduced corruption, enhanced transparency, and improved effectiveness–could bring stronger growth to the Ugandan economy than oil will.  Think about what Uganda can do, what Uganda can become, if you can benefit from both.

President Biden established the fight against corruption as a core national security priority.  And it is a core priority of the U.S. Mission to Uganda as well.  The U.S. government has significantly contributed to advancing accountability and good governance in Uganda.  We have supported the Ministry of Health to recover over $2 million in unaccounted funds and streamline contractor performance.  We have also supported the improvement of the quality of financial and procurement audits of several local governments.

I also want to recognize all the others in the room who are champions in the fight against corruption–other development partners, Ugandan civil society organizations, religious leaders, and officials of the Government of Uganda, including the Uganda Revenue Authority, which has taken a pledge against corruption.

However, it is evident that there is still a lot of work to do.  A recent report of the Auditor General found challenges in the accountability of resources for secondary school and health center construction projects.  The report found overpayments and irregular expenditures amounting to 924 billion shillings.  This is 260 million U.S. dollars that could have been used to fund education and health services for millions of Ugandans.  We can all do better for the Ugandan people.

We all have a role to play in this fight against the culture of corruption and holding the government and each other accountable. That is why today, we are launching a project that will strengthen public sector leadership and accountability.

This new USAID project will support citizen and civil society engagement in their anti-corruption initiatives.  The project will also strengthen the government’s rewards and sanctions system, standards, and norms, and address behaviors that continue to enable the abuse of public office for private gain.  We want every Ugandan to be able to access public services without paying a bribe, so that they can build their businesses and strengthen their communities instead of further enriching someone just for doing their job.

This project will partner with local governments and institutions at all levels to ensure officials respond to communities’ needs.  Specifically, the project will focus on strengthening budgeting, financial management, and procurement processes so that they are not as susceptible to corruption.

One area that is particularly susceptible to corruption is the development of infrastructure, especially large-scale infrastructure.  Corners are cut, quality is sacrificed, and safeguards are bypassed, all as a way to funnel funds to a few corrupt individuals involved in the project administration–and all of which erode the long-term benefit of a project and can even result in harm to individuals, to the environment, and to the economy.  With oil extraction on the horizon and with other major infrastructure projects in the works, the Ugandan government and the people of Uganda must be clear that they will not tolerate corruption.  To achieve this, all stakeholders—in government, civil society, private sector, media, and development partners—and all of us here today—need to fight this pernicious disease and promote accountability.

The United States is keen to work with Ugandans to see this new project make significant inroads in fighting corruption and promoting stronger transparency and accountability.

I therefore take this opportunity to launch USAID’s Strengthening Systems and Public Accountability project.  The U.S. government looks forward to working with all of you.