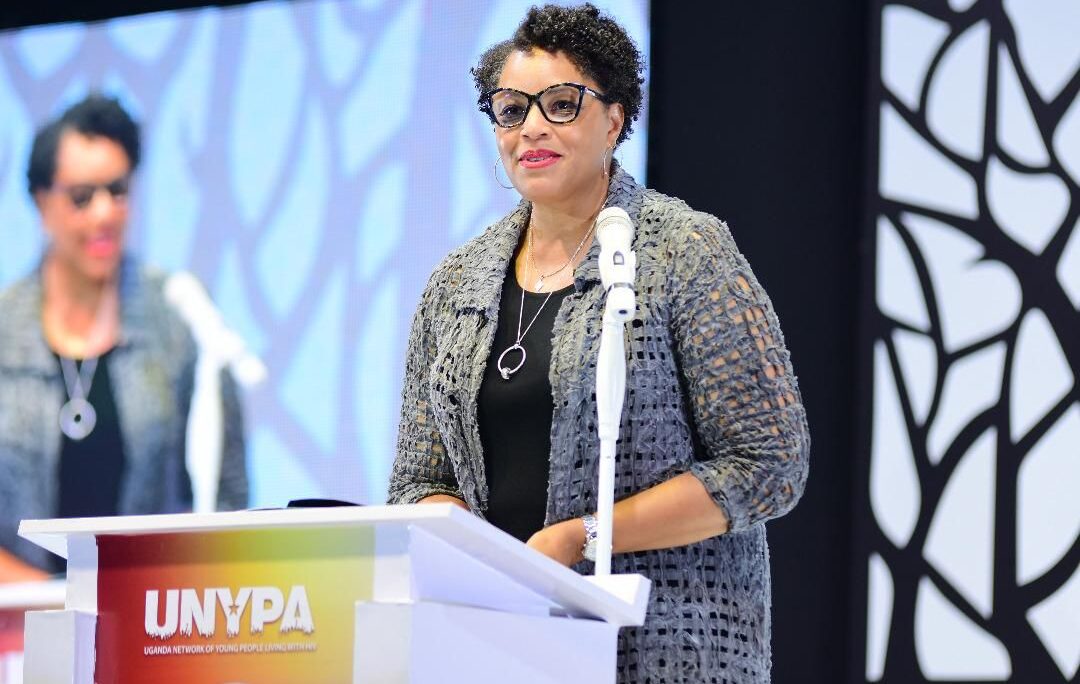 Good afternoon to you all.  I am so honored to be with you today for the Y+ Beauty Pageant Grand Finale.  This event is particularly special to me because just about one year ago, my first public engagement in Uganda shortly after I arrived was the Y+ Beauty Pageant 2020 Grand Finale.  My participation in that spectacular 2020 event was a fantastic way to begin to a memorable year of engagements with the youth of Uganda.

Admittedly, at this time last year, I was still getting settled into my new home and learning my way around.  Since then, my understanding of HIV in Uganda and the roles that civil society organizations like Uganda’s Network for Young People Living with HIV, or UNYPA, play alongside and in partnership with the U.S. government has grown by leaps and bounds.  And let me tell you, this has only increased my amazement and respect for UNYPA and the work that their ambassadors are doing throughout Uganda to reduce stigma and discrimination, to support service delivery, and to advocate for greater involvement of youth in Uganda’s National HIV response.  This is particularly important because youth are one of the communities least likely to know their status, least likely to be on ARVs, and least likely to have suppressed viral loads.  So, if we are going to reach targets for epidemic control of HIV in Uganda – meaning 95% know their status, 95% are on treatment, and of those 95% are virally suppressed – we need young people on board and we absolutely need civil society organizations like UNYPA to get us there.

Last year’s beauty pageant theme was “Changing the Narrative,” and this year’s theme is “Opening Opportunities” and I want to tell you how my interactions with UNYPA and the Y+ ambassadors have shown me first-hand how this organization has and is continuing to change the narrative and open opportunities for young people living with HIV across Uganda.

Last year at the Grand Finale event, I met Michael Ssenyonga, as he handed over the title of Mr. Y+ to his successor.  Little did I know that Michael was already working alongside PEPFAR — The U.S. President’s Emergency Plan for AIDS Relief — and that our paths would cross professionally throughout the coming year.

With Michael’s permission, I will share a bit about his story and how his involvement with UNYPA has opened up opportunities for him and many others.  In 2016, when Michael was 16, his guardians finally disclosed to him that he was HIV+.  Michael kept this new knowledge to himself and did not share it with anyone out of fear of what others might think.  In 2018, when Michael was in Secondary Four and two years into sitting with his secret status, he happened upon the 2018 Y+ Beauty Pageant regional auditions.  Michael wasn’t even sure what the event was but decided to stay and find out.  Unexpectedly, Michael’s attendance and engagement with UNYPA members at that regional event in 2018 changed the narrative of his life forever.

On that day, Michael was inspired to disclose his status to UNYPA members and began the journey of owning his status and using it to become an advocate for others.  Within the following year, Michael realized the opportunity he had to be a voice for the rural perspective of those living with HIV and the specific challenges they face.  He embraced that opportunity by founding the Kasese Network of Young People Living with HIV.  The Kasese Network now consists of 30 peer leaders supporting more than 500 young people living with HIV in the Kasese area through psychological support and service linkages.

After founding the Kasese Network, Michael took the leap in August 2019, participated in the UNYPA Regional Y+ Beauty Pageant auditions, and was selected as a finalist.  In November 2019, Michael was crowned Mr. Y+ at this same Y+ Grand Finale event we are attending today.

In early 2020, with the arrival of COVID-19 and accompanying lockdown, as Mr. Y+, he took to heart his mandate to own his status and advocate for and serve his peers.  Michael realized that in his community, many young people living with HIV were suffering severe hunger as a result of the lockdown, making it increasingly difficult to take their ARVs without harsh side effects.  Michael worked with UNYPA to successfully petition the district leadership for available food rations and made sure those rations were delivered to 700 young HIV-positive people to ensure they maintained their nutrition and continued with their ARVs.

Around this same time, Michael identified an opportunity to become a trainer for the “National Young People and Adolescent Peer Support” group (commonly known as ‘YAPS’) utilized to strengthen peer support interventions for young people living with HIV.  During this time, the United States, through the U.S. President’s Emergency Plan for AIDS Relief, or PEPFAR, was piloting this model in 15 districts where implementing partners were identifying, training, and mentoring HIV positive people to support HIV identification, treatment adherence, treatment retention, and viral load suppression among adolescents and young people living with HIV.

The project supports those trained by providing them with bicycles, field gear, job reference guides and tools, and a monthly stipend to facilitate their service delivery.  They have weekly work schedules for their support at the facilities and in the communities where they carry out home visits, sensitization, peer counseling, and conduct follow-ups of missed appointments, among others.  During the past 18 months as a national trainer of trainers, Michael has volunteered to train more than 100 peer mentors in the Kasese, Kiboga, and Kyankwazi areas.

In addition to this, Michael saw a call for applications to participate as a monitor in a pilot study for the independent Community-Led Monitoring of PEPFAR programs.  Michael applied and was selected to participate in the successful 2020 pilot that allowed ordinary Ugandans and local communities to directly shape the HIV/AIDS activities supported by the United States in Uganda.  Through this process, the people’s and community’s voices were supported by unbiased, deliberate, and data-driven advocacy.  For example, community feedback has resulted in the expansion of a program designed to help young women live safe, productive, and AIDS-free lives in urban areas like Kampala, and increased focus on community-led treatment literacy and multi-month ARV dispensing.

That brings us to the end of 2020, where I initially met Michael very briefly during last year’s Y+ Grand Finale and had no idea that through his involvement in UNYPA, he had become a partner and advocate of our U.S.-supported programs.  Shortly after the Grand Finale event last year, Michael took a permanent job as a community monitor of PEPFAR programs in the Mbarara region and is now a permanent part of our PEPFAR stakeholder team.

And just one month ago, while reviewing U.S. government-supported programs in western Uganda, I met Michael again in Kasese.  This time, I was able to sit down and learn more about his journey with UNYPA and all the incredible work he, and young people like him, are doing to support their peers and the work that PEPFAR is doing throughout the region and country.

I have used Michael as an example because I know him, and he is exceptional, but he is just one of the many beautiful and extraordinary people who are now able to shine because of UNYPA and the confidence and opportunities that the network provides its members.  It is clear the beauty we are here to celebrate today is not only about physical beauty but about the beauty inside each one of these phenomenal young people who have taken their status and are using it to better the lives of their peers, their communities, and ultimately Uganda.

We are proud of you, Michael, and, UNYPA — we are grateful and amazed by your organization and all that you do.

Congratulations to all of you!  Thank you!