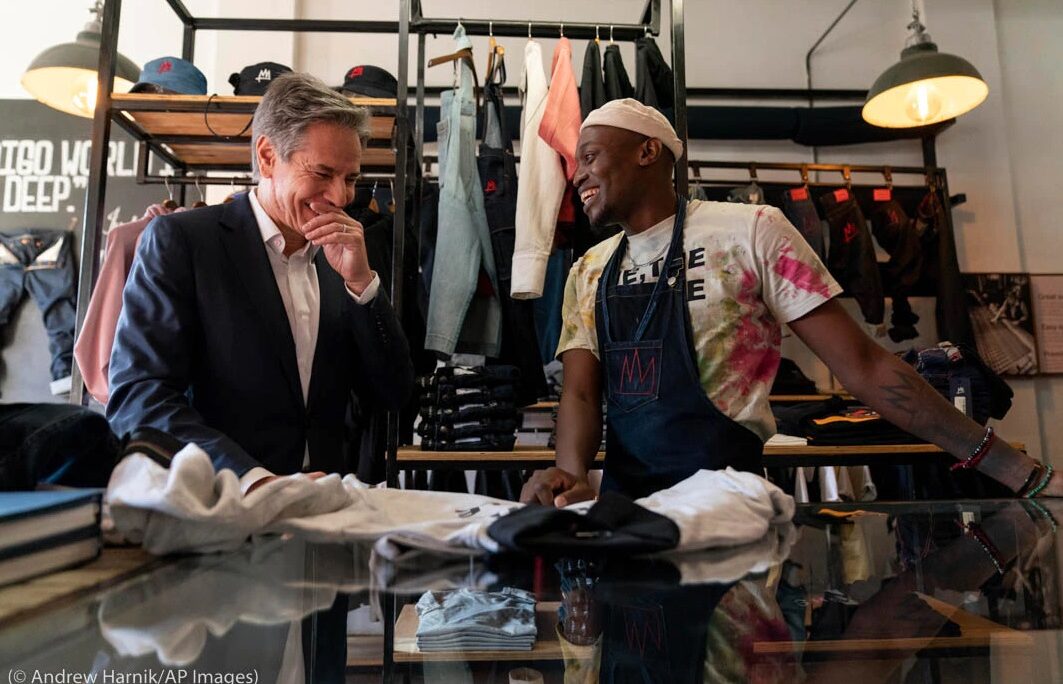 The United States and Africa must “work together as equal partners,” to tackle some of the world’s most pressing problems, Secretary of State Antony Blinken said August 8.

Blinken highlighted those challenges in a major speech delivered at the University of Pretoria in South Africa, while outlining a new U.S. strategy to advance shared goals with African nations.

“The United States will not dictate Africa’s choices. Neither should anyone else. The right to make these choices belongs to Africans, and Africans alone,” Blinken said.

The secretary noted that in 1963, the African Union’s predecessor began its charter by calling for the “inalienable right of all people to control their own destiny.” Africans also championed the idea that climate is connected to health and that inequity threatens security.

“Put simply,” Blinken said, “the United States and African nations can’t achieve any of our shared priorities, whether that’s recovering from the pandemic, creating broad-based economic opportunity, addressing the climate crisis, expanding energy access, revitalizing democracies, strengthening the free and open international order — we can’t do any of that if we don’t work together as equal partners.”

The United States will uphold international rules that allow people and nations to choose their paths and shape their world, Blinken said.

U.S. partnerships in Africa are expanding internet access to enable the free flow of ideas, information and investment. The U.S. International Development Finance Corporation financed $300 million in 2021 to build and operate data centers to improve connectivity in Africa.

The overwhelming majority of Africans favor democracy. Yet ensuring democracies deliver for citizens is a challenge faced by countries around the world, Blinken said. The United States and African partners are tackling disinformation and corruption, and strengthening African security forces.

Blinken said the U.S. government is authorized to invest $200 million a year to promote peaceful, inclusive and stable societies around the world over the next 10 years, including countries such as Mozambique and the coastal West African nations of Benin, Côte d’Ivoire, Ghana, Guinea and Togo.

Peaceful transitions of power are vital to democracies, Blinken said. He commended African leaders, including the presidents of Ghana and Nigeria, now in their second terms, who support a ban on third presidential terms.

The COVID-19 pandemic has driven more than 55 million Africans into poverty. Russian President Vladimir Putin’s war against Ukraine is worsening food shortages in many African nations.

The United States and international partners have so far provided nearly 174 million COVID-19 vaccine doses to 44 countries in Africa. And this year, the United States has provided $6.6 billion in humanitarian and food assistance to African countries.

“THERE IS SO MUCH MORE FOR AFRICAN NATIONS AND THE UNITED STATES TO DO TOGETHER.”

Africa is suffering the effects of the climate crisis, including powerful storms and flooding. Yet sub-Saharan Africa has contributed only 3% of global emissions that drive climate change.

The United States is working to correct that imbalance, Blinken said, by supporting greater access to clean energy and making the most vulnerable countries more resilient. The United States and partners in Ghana are building West Africa’s first hybrid solar-hydro plant that will improve reliability, lower costs and cut emissions. Green energy investments in Kenya have helped created more than 40,000 jobs, Blinken said.

Building partnerships to better tackle today’s challenges will help address obstacles that have yet to come, Blinken said. “There is so much more for African nations and the United States to do together across so many fields, including some we may not even have discovered yet. As partners, that horizon is ours to make.”

This article was originally published on https://share.america.gov/