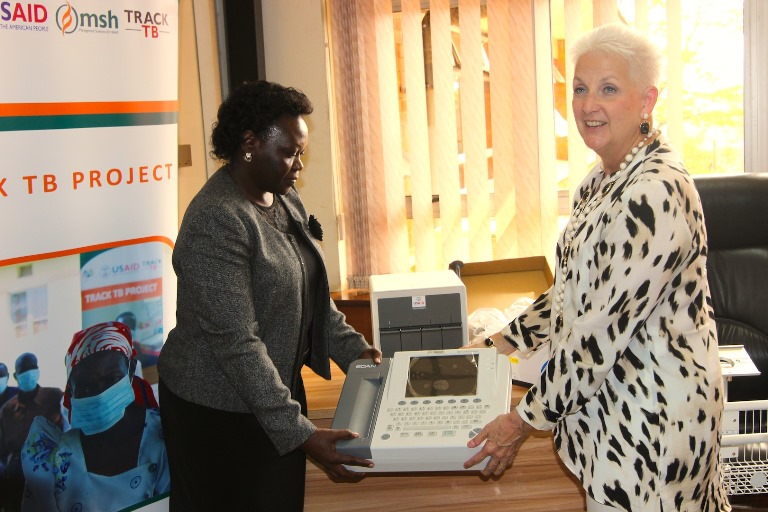 KAMPALA – The United States today demonstrated its ongoing support for and commitment to the improved health and well-being of all Ugandans with the donation of state-of-the-art medical equipment that will help health officials detect, monitor and treat tuberculosis (TB) and drug-resistant tuberculosis. In a February 10 ceremony at Uganda’s Ministry of Health in Kampala, U.S. Ambassador to Uganda Deborah R. Malac handed over nine GeneXpert TB machines as part of an ongoing program to help strengthen the country’s health systems.

Through its advanced technology, GeneXpert machines enable health officials to form an accurate diagnose of a TB patient in just two hours, rapidly advancing that patient’s care and treatment, and ultimately, saving lives. This donation comes at a critical time in Uganda’s fight against TB. The country’s recent TB prevalence survey showed that there are an estimated 50,000 undiagnosed TB cases in Uganda each year – a much higher rate than previously thought. The Ministry of Health will be training Uganda’s health care workers to use these GeneXpert machines as a vital part of Uganda’s TB control efforts.

Ambassador Malac noted the critical role this new equipment would have in keeping Ugandans safe and healthy. “Rapid diagnosis of TB will benefit the tens of thousands of Ugandans who suffer from this disease – but it will be especially important for people living with HIV and children,” she said. “The U.S. government is committed to improving the health and well-being of all Ugandans, who deserve to live in a future free from the debilitating effects of TB.”

Today’s handover follows the donation of 20 GeneXpert machines by the U.S. government over the past four years. It is part of a broader program aimed at reducing the burden of TB, drug-resistant TB, and TB-HIV co-infection in Uganda through the United States Agency for International Development’s (USAID) TRACK TB project. Working in collaboration with the National Tuberculosis and Leprosy Control program, this $12.5 million initiative is part of the U.S. government’s commitment to help end the TB epidemic in Uganda.