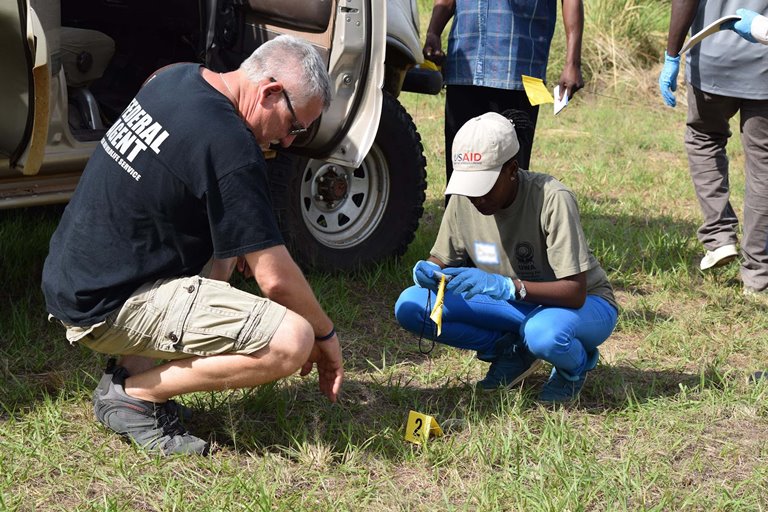 The U.S. Government is helping to build the capacity of Ugandan authorities to protect the country’s natural heritage and to combat illicit trafficking that threatens both Uganda’s abundant wildlife and security. The donation of 10 wildlife crime scene investigation (WCSI) kits by the U.S. Agency for International Development (USAID) will assist several Ugandan agencies in their mission to combat wildlife-related crimes throughout the country. The Uganda Wildlife Authority (UWA), the Uganda Police Force (UPF), and the Natural Resource Conservation Network (NRCN) were among the beneficiaries on this donation, and also received training in forensic investigation techniques.

Law enforcement and forensic science experts from the U.S. Fish and Wildlife Service – a division of the U.S. Department of the Interior (the lead U.S. agency for public land management) – trained 17 investigators from UWA, UPF and NRCN during a recent week-long workshop near Murchison Falls National Park. With support from the Uganda Conservation Foundation, these experts helped participants develop the skills to conduct wildlife crime scene investigations, including collecting evidence and preserving the chain of custody. The workshop also fostered cooperation and information exchanges among the participants from UWA, UPF, and NRCN, which will help to advance future investigations.

After the workshop, USAID donated 10 wildlife crime scene investigation kits to be used by the trained investigators in the field. The kits contain materials necessary for collecting and preserving evidence from wildlife crime scenes, which is crucial for the successful prosecution of wildlife crimes. USAID made this donation through its regional Partnership to End Wildlife Trafficking with the Interior Department’s International Technical Assistance Program (DOI-ITAP). “Wildlife crime is a threat not just to conservation, but to the security and livelihoods of Uganda’s people,” said USAID Mission Director Mark Meassick. “This partnership allows us to share the expertise of U.S. conservation professionals to help enhance Uganda’s wildlife management and enforcement capacities, improve national and international coordination, and share best practices.”

Wildlife trafficking remains a significant problem for Uganda. The Standing Committee of the Convention on the International Trade in Endangered Species of Flora and Fauna in 2013 named Uganda one of the leading nations responsible for illegal ivory trade. Between 2009 and 2014, some 20 metric tons of ivory were trafficked through Uganda, mainly to Asia. The country’s continued role as a transit hub for illegal trafficking also exposes it to the negative effects of organized crime and corruption. Illicit revenue gained from such activities often funds insurgent groups that contribute to regional instability and fuel further demand for trafficked products.

The training workshop and donation of the kits are the first steps in a planned program of training and technical assistance in combating wildlife crime to be implemented under the partnership between USAID and DOI-ITAP. This support aims to build a cadre of Ugandan wildlife professionals with the specialized knowledge and skills to bring wildlife poachers and traffickers to justice, and to help end practices that threaten both Uganda’s rich biodiversity and security.