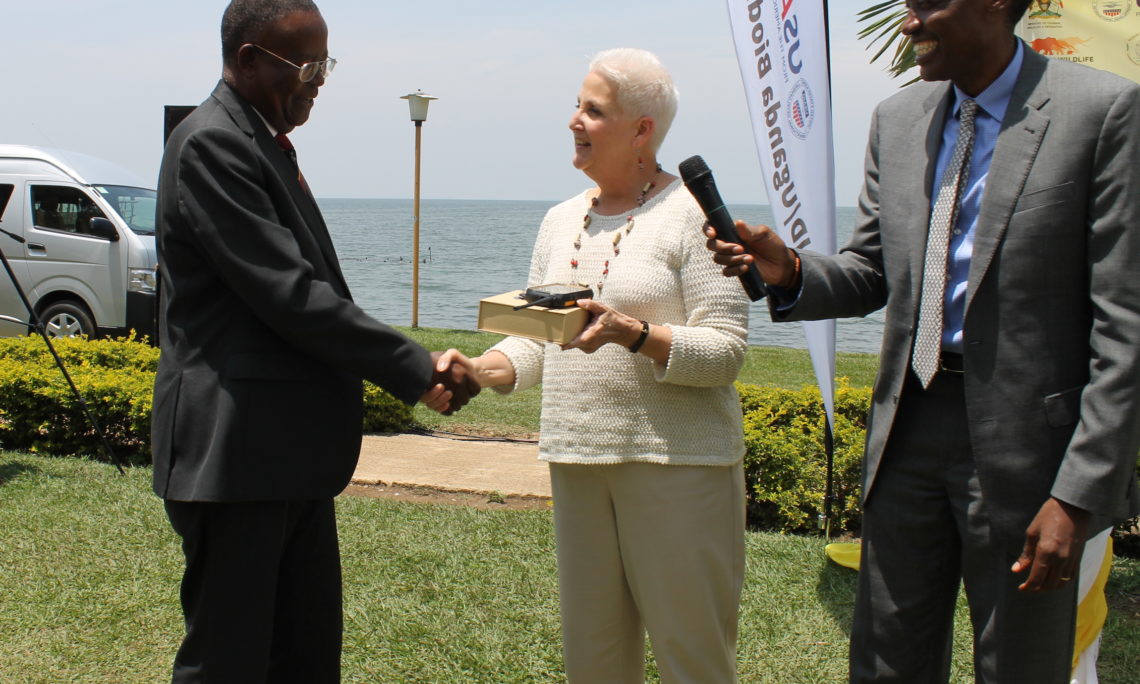 Ambassador Deborah R. Malac hands over one of the 130 smartphones and 50 power banks to Professor Ephraim Kamuntu, Minister of Tourism, Wildlife, and Antiquities

On August 23, the USAID/Uganda’s Biodiversity Program, in partnership with the African Wildlife Foundation, the Wildlife Clubs of Uganda and the Ministry of Tourism, Wildlife and Antiquities, celebrated the winners of this year’s Conservation Fine Art Challenge in Entebbe.

In her remarks, Ambassador Malac noted that the U.S. Government is committed to working with the Ugandan Government to combat wildlife trafficking. “This we can do by collaborating and strengthening national agencies, including law enforcement and the judiciary, to ensure that wildlife crime cases are appropriately settled.”

The Ambassador also handed over 130 smart phones and 50 power banks to the Uganda Wildlife Authority to improve its ecological monitoring of protected areas. This gift supplements equipment that USAID previously provided in an ongoing effort to remove Uganda from the list of the “gang of eight” most notorious wildlife and wildlife product transit routes.

Through the U.S. Department of State’s Bureau of International Narcotics and Law Enforcement Affairs and working with the African Wildlife Foundation, the American people also provided a van to the Uganda Wildlife Authority’s canine unit to ease movement of sniffer dogs and handlers throughout the country.

In his speech, Minister of Tourism, Wildlife and Antiquities Honorable Professor Ephraim Kamuntu said, “Conserving Uganda’s natural wealth is fundamental to achieving the vision of becoming a middle-income country. The government appreciates that the youth, who possess talent, energy and potential, are critical in implementing this vision.”

The Conservation Fine Art Challenge aims to create conservation awareness in all secondary schools across the country. The conservation youth sensitization campaign contributes to the 2017 world wildlife day theme “listen to the young voices,” which encourages youth around the world to rally together to address ongoing major threats to wildlife.