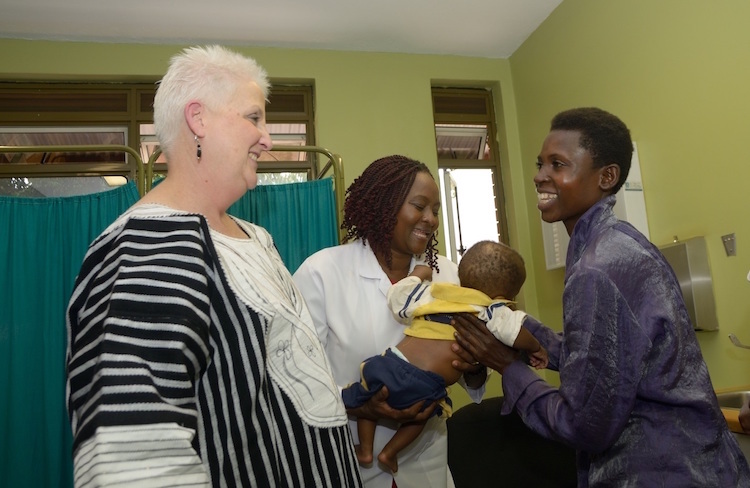 U.S. Ambassador to Uganda Deborah R. Malac shares a joke with a mother at the Baylor College of Medicine-Uganda Paediatric Center of Excellence in Mulago, Kampala. Ambassador Malac visited Baylor College in honor of World Health Day in April to demonstrate the U.S. Government’s commitment to improv

April 7, 2017: Today on World Health Day, Uganda should take stock of the progress it has made in creating a healthier population. According to the recently released Uganda Demographic Health Survey (UDHS), there are some clear and positive trends: more women delivering babies in health facilities; substantial reductions in infant and under-five mortality rates; and an increased percentage of households with at least one insecticide-treatment bed net to combat malaria. These steps are important for achieving the United Nations’ Sustainable Development Goal of ensuring good health and well-being for all ages.

But while these statistics are encouraging, they mask a troublesome reality: the health of most Ugandans remains poor, with children especially at risk. There are many reasons to explain this situation, but most boil down to the fact that the country’s health care system is under-resourced, mismanaged, and unable to meet the demands of a growing population.  It is well past time for Ugandan authorities to begin investing more in the health and well-being of their own people, not just large-scale infrastructure projects. Without its health, Uganda will never have wealth.

Experts from the U.S. National Institutes of Health to the World Bank are clear: in a developing country, government must give priority to the health of its population. There is strong evidence showing that a government’s investments in the well-being of its citizens are the real keys to generating prosperity and progress. President Museveni pledged in the 2001 Abuja Declaration to dedicate 15 percent of the national budget to health; today that number stands at just seven percent. But the Government of Uganda‘s proposed budget for the next fiscal year recommends nearly a one-third cut for the Ministry of Health, plus reductions in other health areas and projects.

Uganda’s health sector is already not meeting the needs of its citizens, especially its youngest and most vulnerable. The average Ugandan right now is a 14-year-old girl, and this child’s health is especially fragile. She has a one-in-four chance of becoming pregnant before age 18; is likely to be sexually or physically abused at school; and is put at further risk by poor nutrition. A third of all new HIV infections occur among female adolescents, and the number of adolescents with HIV/AIDS has more than doubled since 2001. There are still at least 2.4 million Ugandan children under five who are chronically malnourished. The proposed reductions to the country’s health budget will likely put these young lives in greater jeopardy.

If nearly one out of every three children does not have a healthy start in life, how can they be expected to grow into healthy and productive adults? If Uganda’s adolescent girls are not set up to succeed or thrive, how can Uganda? If future generations do not have their health today, how can Uganda become prosperous tomorrow?

The answers are obvious. Investing more in children’s health produces better educated and more productive adults. Ensuring the health and well-being of Uganda’s girls allows the country to harness the potential of half its citizens. Growing an economy requires a population healthy enough to work. These are the investments that ultimately matter most.

Building roads, railways, or airlines will not make or keep a population healthy. Hospitals, medicines, and trained health workers will, and these are the investments that should take priority. Ugandan authorities must also eliminate the corruption and inefficiency that has infected the country’s health system – and dedicate themselves fully to improving the health and well-being of their citizens.

The United States has done its part to help build a healthier Uganda. Last year alone, we invested nearly $500 million in the country’s health sector – more than what the Government of Uganda has budgeted – in areas such as anti-retroviral therapy, tuberculosis treatment, and malaria eradication. This assistance is saving lives and improving the health of millions of Ugandans, and we are proud to contribute to such efforts.

But the Ugandan government now faces a crucial choice about the future of this country. Cutting health spending in favor of infrastructure projects jeopardizes Uganda’s past decade of progress. It endangers the health of all Ugandans.  Authorities must not risk undermining the country’s development by assuming others will continue to fills funding gaps that could leave millions sick and vulnerable. The international support Uganda has relied on for so many years may not materialize in a time of shrinking budgets and shifting priorities.

This may appear to be a tough decision, but there is really no choice at all. A healthy population is the foundation for growth and economic progress. Healthy children are more likely to stay in school and earn more when they enter the workforce. Healthy adults live longer and are more effective workers. Simply put, health creates wealth. And so, the Government of Uganda must invest more in its health sector in order to give this country and its citizens the healthy and prosperous future they deserve.